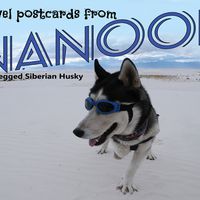 Mark has been a professional photojournalist and amateur comedian for over 25 years, covering everything from hard news to high fashion with a keen eye towards generating creative and powerful imagery. Born and raised in the suburbs of Detroit, Mark has traveled the country many times over, residing in Oregon during the ‘80s where he studied at Portland State University and then northward to Alaska where the final months were spent working aboard oil rigs in the Bering Sea. He began his photographic career in 1987 at the Arkansas Democrat-Gazette statewide daily newspaper, highlighted by the two presidential runs of Bill Clinton and the ensuing media swarm that engulfed Little Rock and the state of Arkansas as well as a newspaper war that created the present day paper. His latest ongoing project is a series of children’s photographic books starring his 3-legged Siberian husky named Nanook. Nanook has been wagging his tail across America, posing for pictures along the way at famous and not so famous landmarks, baseball parks and other cool places. Mark is currently based somewhere in the Deep South.