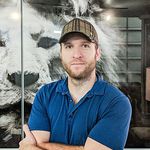 #1 Bestselling author of over 50 books & Co-founder of Six-Figure Ghostwriter.

Matthew Thrush has worked as a copywriter and Arabic linguist for many years, and currently works as a technical writer for cPanel in Houston, TX. His work has been published in literary magazines at Klein High and the Sam Houston State Review. His articles have been listed as Editor’s Pick of the Week multiple times on Storychick, and also featured on AllThingsRelax, ABIS, Woodlands Church, and iOffice. He also writes serialized fiction for Radish, Wattpad, and Channillo.

Matthew has two published fantasy novels with Tate Publishing and one book of short stories and poetry. His passion is to change the world one word at a time and encourage others. He believes it only takes one spark to ignite the hearts of readers and change their lives forever. His current post apocalyptic trilogy foreshadows a future not altogether improbable in the current age. Having accrued nearly 500,000 reads in a single year, the 2136 novels are captivating the hearts and minds of young and new adults everywhere.

Matthew currently lives in Tomball, TX with his wife, their new son, three dogs, and a cat. In his off time, he is finishing up his Master of Science in Technical Communication. In his free time, he continues to write up new book outlines and ideas, while also finishing the ones he’s started. He also has an unhealthy obsession with golf, Alabama football, pizza, and sour gummy bears.

This unique package is to reward those who support early and take action. Because you're a go-getter and take life by the horns, you get to take part in a special promotional offer.

Along with a signed copy of 2136 + its ebook so you can read it anywhere you'd like or share it with a friend, you can choose TWO of the following as your BONUS prize:

Thank you for your support! I'm eager for you to receive your copy and to begin reading. I can't wait to share what I have in store for you in books two and three. :)

For your gracious support, you'll receive a signed copy of 2136 and a FREE ebook with this package. :) Plus, you'll get FREE shipping! How cool is that?

In this Soulcrusher, we'll send you a signed copy of 2136 once it's published and access to the ebook. Have you ever wondered what it's like to envy someone? Well, don't be that person! Make them envy you with one of the first copies of the trilogy!

So you don't want a bunch of books; one or two is just fine with you, but you'd like to get a bookmark, poster, T-shirt, magnet, or coffee mug to display at your home? This package is for you then!

The Early Bird special quickly filled up and I know many of you were wanting to take advantage of that awesome package. It was pretty narly! So, here's your chance! :)

This package is only limited to the next 25 people so act fast! These go quickly. :)

Not everyone is worthy of god-like prowess, but you are the exception. With your divine powers you'll not only gain all there is in the Soulcrusher, but you'll get TWO copies of 2136, in addition to 1 copy of my fantasy series, Raifen: The Search for Truth.

Do you like to flaunt your god-like beauty? I'll toss in a free magnet so all the world can see how awesome you are!

If being a god or goddess wasn't good enough, you've gone and created whole new worlds in your likeness. Everything in the Godkin is yours, PLUS book two of the Raifen series "Raifen: A Call to Evil" AND a review of up to 5,000 words of a story of your choosing from your one and only: ME!

I think you'd look good in a sexy T, we'll throw that in for FREE just for kicks.

For those of you who love shopping for holiday and birthday gifts ahead of time, this package is ideal for you. Not only will you get a signed copy for yourself to enjoy, but you'll also be rewarded with additional copies that you can share with your friends and family on those special occasions. Give someone a gift they'll never forget and always have your name etched in history in the Acknowledgements.

AND two of the following:

Handing out a few copies is not enough for you. Above all else, you love to touch lives and to share with others. Because of your generous heart you need more supplies to be able to hand out to all of those friendly faces that you have in mind.

Maybe you need extra copies for a book club? Maybe you want to hand out copies to strangers in the store or on the side of the road, or in church. Do you know someone that could use a smile to brighten their situation? Bless them with a free signed copy that they'll be sure to never forget. They'll always hold your kindness in their hearts and read words that remind them of your thoughtfulness.

AND three of the following:

This package is for a very special person who has committed to contributing a large amount to help me reach my goal. Because you are so awesome, no words can describe my appreciation and gratitude for your support and friendship. It has been a pleasure to get to know you and share in this journey together.

I want you to feel as special as you've made me feel from your support with some bonus items and plenty of extra copies so you can donate to local libraries and schools, or any special person you choose.

And I'll also send you a surprise gift along with all of the above as a special, "Thank you!" from me. :)

$1000 Someone Truly Special Sold out

This package is for that individual or organization that loves to touch lives. Their influence on the world around them brings happiness to everyone they come into contact with, and this package is no different. For your exemplary support and generosity you receive the best there is to offer.

Because you love to give to others and to see the smiles your generosity and kindness ignites on the faces of those around you, you require the supplies to do so. You've never met a stranger and you already know who you'll send your extra copies and promotional items to right now.

That's how awesome you are!

We just surpassed the first Milestone of 25% pre-orders. Way to go! We are moving right along. And as promised, everyone who has contributed up to this point will receive a complimentary signed copy of Raifen: The Search for Truth.

But that's not all you will get! When we hit our next Milestone of 50% pre-orders you and anyone who helped contribute up to that point will ALSO receive a FREE signed copy of Raifen: A Call to Evil:

PLUS a FREE one-of-a-kind bookmark to decorate your position in the book with. Think we can reach our next Milestone in the next 24 hours? I know we can! Let's do this!