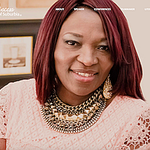 A media-genic life strategist and media expert called Your Global Vision Midwife™ & Dream Weaver™ to mentees and colleagues across the social media platform, Dr. Princess Fumi Stephanie Hancock is a Behavioral Transformationist with a DNP  (Doctor of Nurse Practice) specializing in Psychiatric-Mental Health. She also holds a Ph.D. in Strategic Communications which is an Advanced degree in Writing for the Media Arts (TV/Films). She is often called an influencer across social media platforms: Twitter, Facebook, YouTube, Periscope.

Dr. Hancock with her love for the literary arts and behavioral health sciences has managed to strike a balance between her two lovers. She has done that through her popular Online TV show – I Am Princess of Suburbia®, her podcast, I am A Master Storyteller™, her newly released digital magazine, which is an extension of her company, THE STORYTELLER BISTRO™, a Princess of Suburbia® Company.

To date, she has written 20 books, 9 of which have become Amazon bestsellers in several categories and one, the Billion Dollar Dreamer™, which will be released in  2018. Two of her fiction work have stayed on the bestseller’s list for over 2 years! She just recently released YOUR VISION TORCH™ series as well as HOW TO QUIT YOUR JOB IN 90 Days!, books mirroring her established webinar presentations. She is a contributor for Huffington Post / Thrive Global and is seen several times weekly on Periscope @1PrincessofSub! She is also active on Facebook Live as well as her YouTube channels. Besides being a social media influencer, she has been featured in several newspapers both nationally and internationally.

Fumi Hancock has been featured in several newspapers such as the Tennessean, Tennessean Tribune and several International Newspapers and Magazines. Just recently, she was deemed “child advocate” by over 8 newspapers: Tribune, This Day, Punch, Vanguard, Guardian, The Sun, The Nation in Africa, because of the work she does in Africa. Her accolades span from Africa to the US, as the NAFCA African Oscar Peoples’ Choice Award Winner~ as Favorite Screenwriter, Indiefest & Accolade Global Films Merit Award Winner, and Depth of Field International Film Festival, Woman of Excellence in Films Award Winner.  On the heels of her recently released award winning movie, Of Sentimental Value, she was the first person to receive the prestigious Nollywood, African Oscar Award as the recipient of the 1st Literary Arts Award. Nollywood is the second largest Film Industry in the world.

In January 2016, she was nominated for the STAR AWARD, by an International Organization called Lift Effects, in UK, as one of the 100 Women making a difference globally. In addition, she was nominated  for Literary Arts Excellence by Women of Essence, an organization impacting the world, on achiever at a time. Her Brand, the Princess of Suburbia® recently signed a licensing contract with an International Fashion Designer to create: The Princess of Suburbia® Collection. This collection hit the market (US, UK, Africa, and other parts of Europe) in April 2017.

She continues to provide cutting edge solutions & exposés (through her Books, Online TV Show, Podcast – Spreaker, ITunes, Retreats…. Master Your Millions™ - Tours, Documentaries- Fearless Visionaries Tear the Veil/Feature Films – Of Sentimental Value & Masterclasses) caring for those with mental illness. But more importantly, she has been able to find a middle ground between her love of writing, making films, and her expertise in mental health.

Dove Foundation regarded her latest movie, Of Sentimental Value~ Family approved and recommended for all ages to watch: http://www.ofsentimentalvaluemovie.com

Dr. Princess Fumi Hancock teaches and appeals to both Secular and Christian audiences worldwide, skillfully connecting psychiatry to emotional, spiritual, transformative intelligence. She presents mental health & social issues in practical ways mainly through her camera lens and often invites her audience to share in the stories presented at her conferences. She speaks on diverse topics relating to Psychiatric-Mental Health, Personal Development, Entrepreneurship, Writing for the Media: TV/Films.

You'll get one copy in print and e-book ((PDF, ePUB, MOBI) form, plus you’ll get exclusive access to updates, manuscript revisions and an invite to join my princess awakening community. *This bonus is limited to the first 150 readers.

(1). You'll get one signed and personalized copy in print and e-book (PDF, ePUB, MOBI) form
(2). You’ll get exclusive access to updates, manuscript revisions and an invite to join my princess awakening community.

*This bonus is limited to the first 100 readers.

(1). You'll get one copy +2 (signed and personalized) to share with friends at discount, in print and e-book (PDF, ePUB, MOBI) form,
(2). A HUGE thanks from me in the acknowledgements section.
(3). Shout-out on Twitter

(1). 5 Limited Edition Paperback Copies to share with your friends
(2). Ebook (PDF, ePUB, MOBI)
(3). Free Program: You’ll also get a special video training or coaching session on 7 days to release your amazing life with me.
(4). Recognized as an Supporter in the printed Limited Edition, the commercial release edition, and the final Ebook (PDF, ePUB, MOBI)
(5). Shout-out a cross social media (over 50,000 followers combined: Facebook)

(1). 12 Limited Edition Paperback Copies to share with your friends
(2). Ebook (PDF, ePUB, MOBI)
(3). Free Program: You’ll also get a special video training or coaching session on 7 days to release your amazing life with me.
(4). Recognized as an Supporter in the printed Limited Edition, the commercial release edition, and the final Ebook (PDF, ePUB, MOBI)
(5). Shout-out a cross social media ( Facebook & Twitter)

You want this book to reach a group of people and contribute to this campaign in a big way!

(1). You'll receive 20 copies
(2). Get recognized on the first page as a Patron
(3). Get the Masterclass: 7 Days to Release Your Amazing Life
(4). Land a quarter page AD inside of the hot "I Am A Master Storyteller" Digital Magazine (see sample: https://payhip.com/b/uOjk)
(5). A shout - out on my podcast: STORYTELLER BISTRO
(6). A shout out on twitter accounts

Many are looking for ways to impact their community at large or family, this is your way of killing two birds with one stone: help promote my cause as you impact your world.

Hire me to speak at your event and...

(1). *I'll bring 100 print copies with me for you and your guests to take home. You’ll also get everything in the previous bonus.

(2).* Land a FULL page AD inside of the hot "I Am A Master Storyteller" Digital Magazine (see sample: https://payhip.com/b/uOjk)

(3). Get the Masterclass: 7 Days to Release Your Amazing Life

(4). *Be a Special Guest Co-host for One Day on the STORYTELLER BISTRO Podcast (on ITunes, Soundcloud, Spreaker etc.)
Sampler: https://itunes.apple.com/us/podcast/storyteller-bistro-podcast-with-dr-fumi/id1331829486

First, I want to sincerely apologize for the lateness in releasing this book. There were circumstances beyond y control. Today, I am indeed happy to say that we are ready to ship the book to you. We will officially release the book November 1 2018 online and in all places where books are sold.
In order to complete this process, I need your addresses. Please email your addresses to storytellerbistro@gmail.com .