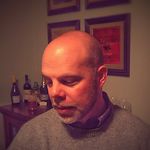 Steven L. Lovett is a life-long fan of crackling fires, cold winds in autumn, stacks of hand-cut firewood, stormy-grey oceans, and the kinds of stories which keep all of us looking for magic in quiet places.

Steven is an admiring student of T.H. White, a sentimentalist of C.S. Lewis, and an unabashed fan of J.R.R. Tolkien. (He says he'll have "made it" as a novelist when everyone begins referring to him as S.L. Lovett.) A professor by day and a writer by night (or by weekends or any other free time), Steven has previously published three nonfiction books and several scholarly journal articles, and possesses a trove of waiting-to-be-published short stories and one novella (a Poe-esque tale).

Steven lives with his wife, their daughter, and far too many dogs on a quiet, wooded street in a small town in eastern Kansas.

A Place With Dragons is Steven's debut novel and the first of a series about Telluric Grand, The City With Seven Gates.

For all those die-hard book hounds out there, who have shelves full of dog-eared, wrinkled, and worn-out soft cover books.

Signed personally by me to you, your favorite person, Lord Aldus Ward, or whomever...

A beautifully produced hardback copy with a bookmark.

Signed personally by me to you, your favorite person, Lord Aldus Ward, or whomever...

During the writing of "A Place With Dragons," I kept a leatherbound notebook with pen and ink drawings, pictures, and handwritten notes about characters, scenes, histories, and facts about the mysterious world of Telluric Grand.

You can own a beautifully framed replica of one of the pages from my personal notebook.

"A Place With Dragons" is set in the magical world of Telluric Grand, a world parallel to our own but filled with giants, Wisps, War Crows, and ... dragons.

You can own a beautifully framed and enlarged replica of the map contained inside the novel. A true "treasure map" of a new world!

Includes
- an exclusive download of the e-book which will be available at the close of the campaign (on August 8th)
- a personally signed hardback copy of the book
- a framed and enlarged replica of the map contained inside the book, signed by me
- a letterpress bookmark

For a dinner party, library event, wine tasting event, or for a very unique bedtime story, I will be happy to show up and read a selection from the book. I will also bring 10 personally signed hardback copies for you to keep or give away.

NOTE: I live in Central East Kansas. If your event is more than 150 miles away from my home in Emporia, you may be responsible for the cost of my transportation and lodging. Please let me know, and we can work out the details together.

Last night's book-signing event was an out-of-the-park success! We sold a ton of books, and I had the chance to meet a lot of new people (READERS), and spend time with quite a few wonderful friends.