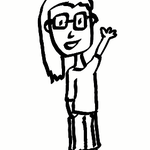 Cathleen Kivett Smith is a seventh-grade student. She's been through those hallways.

Of course, she's not an expert on alternate universes accidentally created by thirteen-year-olds. But that's Sam's job.

Cathleen Kivett Smith is a seventh-grade student. She's been obsessed with writing ever since she was old enough to be obsessed with anything.

As for An Artist's World, she's been toiling and toying with it since fifth grade. This is her first official proposal, however.

Cathleen works as a freelance writer; she mainly focuses on poetry and fiction, although she has tried her hand at unpublished non-fiction once or twice.

She is currently in the publication process for one of her pieces with Mad Scientist Journal.

$10 A Signed Copy of The Book w/ Drawing

For ten dollars, you'll get a signed copy of An Artist's World with a drawing by me. It will be a drawing of one of Sam's creatures or creations.

Get your name in the acknowledgements! Includes one copy of the book.

$35 Create One of Sam's Creatures/Acknowledgments

For this bonus, you get the opportunity to create a creature or creation and have it included in the book. All you have to do is describe your creature, (ex. tall, purple ogre with a straw hat) and I will mention it at least once. You'll get credit in the acknowledgements for this. It also includes a signed copy of the book with a drawing of your creature.

This bonus includes a classroom set of An Artist's World, complete with signatures and drawing. Fifteen copies included.

You get fifty signed copies with a drawing at a heavily discounted price.

Sam Robertson has always been an artist, lurking in her own world. What she doesn't know is that her world has become a universe--and trouble is brewing.

Sam Robertson isn't your typical, run-of-the-mill ninth-grade student. She's never really been the best at listening. Or focusing. Or anything like that, whatsoever. Most people would just say that she's just in her own world.

If only they knew how right they were.

Every time Sam takes pen to paper, every time her imagination is gushed onto the back of a homework assignment, every time a doodled-on napkin is tossed into the trash can, it's not just Sam.

She's accidentally tapped into an alternate universe. Well, maybe "tapped into" isn't the best way to word it. She  accidentally created one. And she has no idea.

Well, she had no idea. Before that whole mess of font-changing homework, weird messages in her drawings, and homicidal pencil cases started.

Her best friend Leo and her were at the park one day. Then they weren't. All because some mystical creature transporter-guy thingamabob creature (Sam's official name for it) decided that it was a great idea to approach two fourteen-and-thirteen-year-olds in the park and take them to an alternate universe. And he didn't even have parental permission, or a signed document, or anything.

Then he (it? she? thingamabob?) took them across the universes and showed them everything.

It was breathtaking. Amazing. Unbelievable. Everyone had their own bubble, their own world, their own universe. Everyone who had ever so much as breathed air onto a paper had their own planet, designed and twisted and turned around to be uniquely theirs.

Of course, that's when Sam had the genius idea to ask, "So...where's mine?"

And that's when chaos began. One of Sam's worlds was in a bit of a pickle. Well, more of a civil war, actually.

And, because it was Sam's planet, she kinda had to play referee.

So they were sent there. And, again, no parental permission or signed document, or anything. (Except for Leo's sister. But we've been through this.)

And that's when, after a week or so of Sam yelling, "No! Don't break that! Fire-burnt ice lava currency does not grow on trees!" and "Do NOT shoot him with that laser gun. I am warning you, mister!" Sam had to learn something the hard way.

Before I explain what Sam had to learn, I'll backtrack a little.

Have you ever toiled away for hours on that one picture that you just had to perfect, or perhaps edited a poem for the longest time, searching for just the right word?

Well, if you have, when you finished, you probably felt a strong feeling towards your art. Like it was a part of you, just as attached as your arm or leg or head is.

But, that's not true. Just like you thought you couldn't live without chocolate ice cream, while you obviously can.

Umm...you were right about the ice cream, I guess.

Unfortunately, you were wrong about the alternate universe that's tied to your imagination.

Once the glass broke and the sand flew across the fields and the laser guns were fired, Sam began to feel a little depleted. And not tired depleted.

The becoming invisible and unnoticeable depleted.

The kind of depleted that just wears away at you. (Okay. I'm done making puns. I promise.)

This is the point where the civil war gets serious. Actual battles and fights.

Sam is struggling to be heard. Her voice is just a whisper in the millions of battle cries.

Leo is marching across, jumping over fences and out of fields. Sam has to be somewhere. But she's not.

If only he knew she was right next to him.

The world is falling apart.

The ground is littered with rubble. The streets are torn-up. Rain is falling, hitting the ground, drowning it.

It's the final battle. The final chance.

Sam is swimming through, dancing across, and running past. She knocks down barriers and breaks signs, tearing them to shreds. She must divert their eyes, stop them.

Suddenly, Leo reaches out and grabs something. That's it. The clock is ringing on the final battle, Sam's own design. The irony.

He doesn't have time. But he does.

He crudely sketches an image.

In class, Sam is drawing as usual. But after an interaction with a snarky classmate, she finds herself doubting the validity of her art. Leo presents his science project on alternate universes, and Sam sketches a universe with some colored pencils and a half-broken eraser.

If only she knew it wasn't just a sketch.

Mrs. Evans assigns an art history essay; Sam and Leo work together on it.

When Sam flips on her computer and gets the engine running, the first thing she does is look at her essay. But when she twists her head around to grab a lost pencil, it's gone. And her computer reads something other than her art history essay. Something peculiar. Sam writes it off as being a twelve 'o' clock at night sort of thing. But it stays with her all day.

When she's talking with Leo about the incident, her favorite character, Commander Jax, changes expressions. His usual ready-to-march-into-battle face turns into an expression of fear and uncertainty. Sam writes it off. Leo believes her.

He also tells her to get more sleep, only somewhat jokingly.

The next day at school, Sam stays late to finish an assignment. Her pencil case, which usually reads "property of Samantha Offley" now switches to "on...off..." while flickering madly. Sam is terrified.

Leo suggests that they go to the park.

And that's where everything kicks off and starts flying straight ahead.

The potential audience for this novel would be the Young-Adult age group. But you already knew that, so I'll be a bit more specific.

This is a novel for kids and teens aged 12-14. That might seem specific, because it is. This is just a general age group. Kids and teens ages eleven and fifteen would likely enjoy it as well, depending on the individual.

As it is a Fantasy novel, it will likely appeal to teens who find themselves naturally gravitating towards other books of similar themes.

“We
have presentations today, people,” Mrs. Evans blared out, whacking the slide
presenter with her blue-rimmed attendance book.

In my twelve-and-a-half years of meeting
people, I’ve never met anyone as loud or as obnoxious as Mrs. Evans.

It was
truly a talent she had, but not one that I would prefer to surface halfway
through my third period Science class. Unfortunately, I didn’t really have much
of a choice. Our regular teacher, Mr. Brenton, had to leave fifteen minutes
into the class because he had a fever.

It was a
rough transition. In a little over five minutes we went from a teacher who’d
play videos in class because they were “kind of” related to the subject to a
teacher who was quoted as saying, “Videos in class? You’re serious? You’re not
recording this for some online show?”

“Alright,
so I’ll be picking a random person to present first,” she said, shutting her
eyes and clicking her pen into the attendance book. “Okay, it’s Leo.”

Leo’s been
my best friend since the third grade. And he’s a lot of things. He’s nice, he’s
funny, and he’s (relatively) athletic. But the one thing he isn’t is a good
presenter.

Once he
asked me to revise his presentation and I spent more time fixing his then I
spent actually making mine.

I don’t
think anyone ever told him that Times New Roman size three isn’t regulation. Or
that you can’t make your presentation with highlighted hinges. Or that if you
want to include a picture, it can’t be one that your best friend drew of a
purple water fountain that was exploding. Especially if your presentation was
on Mars.

“Are you prepared?” she
asked, looking up and raising her eyebrow.

Her motto with presentations was,
“Guilty before proven innocent.” Anything she could do to deduct points, she’d
do it. Last year she gave my cousin an “F” because he didn’t use
double-spacing. Yes, double-spacing. She actually deducted forty points for
double-spacing.

Like the great friend
that I am, I offered him some sage words of advice.