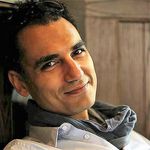 Motez Bishara is a CNN, ESPN, The National and Al Jazeera journalist and author whose readership of millions stretches across the globe. His up-close-and-personal style of feature writing earned him the 2017 Drum Online Media Award for Best Freelance Writer.

Bishara’s first release Beating the NBA: Tales From a Frugal Fan was critically acclaimed as a “must read”, “incredibly interesting” and “thoroughly enjoyable” by Kirkus Reviews. He has been featured on NPR and appeared on dozens of radio stations as a sports analyst. Bishara also serves as an adjunct professor of journalism at the Gulf University for Science and Technology.

$100 Your Name Enshrined in Athletes Who Rock!

Recognized as a Patron in the Acknowledgements section of book

Recognized as a Patron in the Acknowledgements section of book.

Bonus 45-minute Skype video call with the author, which can be used as a general Q&A session about the book, a writing lesson, or an interview to be used part of a course thesis.

Recognized as a Patron in the Acknowledgements section of book.

Sit front row with Motez Bishara at an Arsenal home game as his personal guest! Motez has enjoyed these spectacular seats for ten season at Emirates Stadium located in North London. He has hugged Mesut Ozil from his row after a game winning goal against Leicester City!

You will have an opportunity to meet with the award-winning CNN World Sports feature writer at an Arsenal supporters' pub before the match, and quiz him on all things sports and journalism related during the game.

This opportunity is limited at just five offers and will be scheduled subject to the author and buyer's availability.

Thanks very much for your awesome support!

So far Athletes Who Rock! has garnered six revealing interviews with inspiring figures from the worlds of music and sports.

Thank you once again for your hugely appreciated support. I will check back again as things progress.

In the meantime, as the great Neil Young once said:

Keep on rockin' in the free world ...