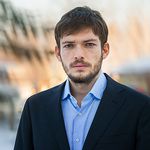 I'm not the author of the original book, but I consider myself a co-author. I plan to hire professionals and help adapt this book for English-speaking readers.

I am not the author of the original book, at least not in a usual way, but I did contribute to this book as much as a 6 year-old could. Now I am 30 years old and I am a teacher of Economics myself – not sure if the book helped or this is a pure coincidence. Now I want to translate and adapt this original book for English-speaking children, mostly with the help of professional translators, proofreaders, and illustrators.

Digital version of 'Basics of Economics' package for children age 6-9 including one of each:

Digital version of 'Basics of Economics' package for children age 6-9 including one of each:

We will prepare for you a print copy of 'Basics of Economics' package illustrated with original images. This edition includes:

Plus digital versions of every book including Parents guide.

Six bundle of a Fairytale book and twelves copies of a Workbook plus digital copy of a Parents guide.
Your name written on a Patron's name page inside the Fairytale book.

30 bundle (at discount) with 3 workbooks and one Parents guide. Plus digital copies of every book.

Unique secret bonus! Let's say there might by one or two new illustrated characters in a Workbook :)

26 bundle (at discount), includes 3 workbooks and one parents guide. Plus digital copies of every book.

2 hours online speaking with authors.
2 hours offline meeting in person in Moscow, Russia or other place (if could be arranged).

65 bundle (at discount) each including 3 workbooks and one parents guide. Plus digital copies of every book.

2 hours online (or offline if could be arranged considering that the authors live in Siberia and Moscow) speaking in person.

4 hours online consulting about the 'Basics of economics' course - perfect for schools!

'Basics of Economics' for children

This campaign is for the translation of a popular children's book called 'Basics of Economics'.

My mother wrote this book when I was 6. She created this fairytale for mе and other kids of my age to explain the basic rules of the real world.

Embed 'Basics of Economics' for children

This is a book that helps children understand the basic concepts of Economics in an easy and playful manner. It is a fairytale about a king and a queen who suddenly lose their magic wand and face the problem of scarcity. Now they have to learn how to distribute limited resources rationally. Together with other members of the royal court they will be introduced to fundamental economic concepts, such as wants and needs, money, banks and insurance, earning and spending money, and will find out how Economics rules our daily life.

THE KING AND FAIRY ECONOMICS

DEMAND - SHALL A KING HAVE IT?

EVERYONE HAS TO CHOOSE

THE KING FINDS OUT THAT HE IS A CONSUMER

THE USE OF HOUSEHOLD CHORES

THE PRACTICALITY OF UNITING IN FAMILIES

A JOURNEY OF KING AND QUEEN TO THE LONG-AGO

... AND WHAT CAME OUT OF THIS JOURNEY

WHO WANTS TO HELP THE KING AND THE QUEEN

... THE ADVICE THAT FAIRY ECONOMICS GAVE TO THE RESIDENTS OF THE ISLAND

LESSON 16 (for the curious ones)

FROM THE HISTORY OF MONEY

WHERE THE HISTORY IS KEPT

WHAT YOU KNOW ABOUT MONEY

THE BET OF THE KING AND THE QUEEN

WHY MAKE A COW GIVE MORE MILK

THE KING AND THE QUEEN GET ASSIGNMENTS

THE KING SIGNS AN ORDER

THE DIFFERENCE BETWEEN MINE AND SOMEONE ELSE'S

PARENTS WILL NOT TEACH YOU BAD THINGS

THE ART OF SPENDING MONEY

WHERE THE MONEY GROWS

A WONDERFUL IDEA OF THE QUEEN

A BANKER HELPS OUT THE SICK KING

THE KING AND THE QUEEN GO TO A BANK

HOW TO GET YOURSELF OUT OF TROUBLE IN ADVANCE

HOORAY! IT IS VACATION TIME!

All three books are interconnected in order for parents to go chapter by chapter with their children, help them solve problems together and answer the never-ending children's questions. The workbook has various tasks for the children based on what they learned reading the fairytale. Sometimes they have to write inside the workbook, or make a drawing, or even use scissors. This means that every child needs his or her own copy of a workbook, while there could be one fairytale and guided book for a family or a class.

All three books are adapted for children from 6 to 9 years old who are about to start school or are already in the first grades.

This package has been published in Russia for more than 15 years, with annual sales of 4,000-5,000 copies. The book has been ordered mostly by schools with Economics in the lower grades’ curriculum, as the books were approved by the Russian Ministry of education. We believe that it could be distributed as a family book for parents and children to read together. This was the original intention of the creators, and we want to make it work now.

We are planning to support a Facebook page dedicated to the book. Launch an English version of the webpage ermakovs.ru to promote the book.

Launch a series of webinars for teachers and parents to demonstrate how 'Basics of Economics' works.

Most existing books introduce only one or two economics concepts and don't give the general idea of how economics work and how its rules are interconnected. None of the books we came across have a workbook or a guide for parents.

THE KING AND FAIRY ECONOMICS

There once was a small imaginary state with a big­ king and a queen who had a daughter and a son of your age.

The king had inherited a magic wand. It made­ any wish come true and everyone got everything what he or she wanted. Life was like a wonderful dream! A fancy party for the wife, new toys for the kids — nothing was impossible! Each week the palace hosted another ­party. Nobody ever worked or worried about anything. Life was perfect until one day...

One day the king woke up in a very bad mood. “Ah, what a lousy life! — he thought. — I wish I had something to want! It's so boring I'm going to cry!”

#Turns out, when a person does not want anything, the person often gets in a bad mood. Have you ever felt like this?#

As the king wanted to cheer up, he went for a walk­ to the royal park before breakfast. Long or short, but the king got ­hungry. What should he do? If we were in his shoes we would have to come back home­, but the king had his magic wand with him. And magic wand can solve any problem: Make a wave and everything you wish for will come true. And so he did. He waved the wand and a table appeared full of various dishes. Just as the king was going to have breakfast, a tiny crooked old lady showed up.

— No way, — answered the king. — I want it all to myself! Move along­, old lady, you are interrupting my meal!

The old lady looked at him with regret, shook her head­ and disappeared as if she was never there. But with her disappeared the table and the royal breakfast. The startled king began to wave his magic wand. He waved and waved until his hand started to hurt, but all in vain. He realized that something was wrong. And that the ­old lady was not just a bypasser, but...

#Who do you think she was? And what has she done?#

Naturally, she was a fairy. She actually created that magic wand herself a long time ago and gave it to the great-great-grandfather of the king for his kind heart and care for other people.  But any good magic loses its power when it is used for bad things. Which is why the magic wand stopped making king’s wishes come true.

It is worth mentioning that our king was not that greedy and evil after all, he had good genes of his remarkable great-great-grandfather. It’s just that in that particular morning he was in the blues. He immediately felt ashamed of how rude he had been to the old lady, but what is done cannot be undone.

Sad and hungry, he returned to the palace. Hardly had­ he opened the door as the queen started:

—    Dear, don’t forget that we are having a party at the palace, a lot of guests are coming, your aunt included.

—    What party?! Cancel all the parties immediately! — cried the king. — Now is not the time for parties. We need to think what to do and how to survive!

So he told the queen what happened to him.

—    Woe is us! — cried the queen bursting into tears. — How on earth are we going to rule the kingdom, raise our children, speak to our neighbours­ when we are as poor as church mice? How do we live without our magic wand?

It is useless to cry, something has be done

—    Find the old lady, — said the queen to the king, — beg her for forgiveness­ and make her give the magic wand its powers back.

—    I am a fairy, fairy Economics, — appeared a female voice, and then out of nowhere emerged the fairy herself.

—    I have been watching you for a long time, — she said strictly to the king. — You have become lazy and greedy, which is why the wand lost its magic powers.

—    Forgive us, please! — the king and the queen started crying­. — This will never happen again! Restore the power of the magic wand­, we cannot live without it!

—   There, there, stop crying, I forgive you, — said the fairy. — But I will not do as you wish. The wand is broken and its powers are gone. But I can still help you. I will teach you to live without the magic wand with the help of economics.

—   Economics is science! And science can do magic things. But to understand it you will have to learn a lot and work hard. Do you agree?

—  Of course, we agree! — replied the king and the queen with one voice.

1. Why did the king get a lot of problems when the magic wand had lost its power?

2. How do people usually get what they need without a magic wand­?

3. Why did the fairy suggest that the king and the queen should study ­economics? How will it help to solve the problems?#

* Do you remember, when ­you were very little and everything was so new and interesting­ to you, you used to ask questions every now and then? You asked questions so often that your parents started to call you a ­Whyer. We also had such nicknames in our childhood. That is why we decided to put all difficult and interesting questions together in the 'Questions from Whyers' section. Try ­to answer them as well.