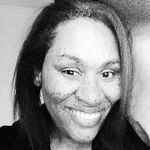 Chamein Canton authored the first wedding stylebook and Foreword Book finalist in 2006. Not His Type was a bestseller and Romantic Times Choice for Best African American romance 2007

Chamein Canton is the author of the groundbreaking fashion book, Down That Aisle In Style, A Wedding Guide For Full-Figured Women. It was the first of its kind and was featured on The Insider/Entertainment Tonight, Get Married and the Today Show in NY.
Her focus on fiction for curvy north of forty fiction began with Not His Type (Genesis Press) which became a bestseller and recipient of Romantic Times award for Best African American fiction in 2007. She published five more bestsellers with Genesis, Bliss, The More Things Change, Waiting for Mr. Darcy, Mixed Reality, and I Take This Woman. North of Forty was published by Etopia Press.
A native New Yorker by way of Long Island, her unique sense of humor and perspective is a result of her mother's frank southern upbringing and her father's erudite cosmopolitan background. Chamein is mother to her twin adult sons, Sean and Scott Snowden, whom she raised as a divorced mother with MS. In 2002, seven years after her diagnosis, she was named National Multiple Sclerosis Society's Mother of the Year Award for the Long Island Chapter. She's lived with MS for almost 25 years and is also a survivor of cancer as well.

Chamein earned a degree in business management from SUNY Empire State College. She founded her eponymous literary agency a decade ago where's she's helped more than 26 authors get published. Chamein still lives on Long Island in the famous horror house town of Amityville.

Receive a digital copy of 2015's North of Forty

When you pre-order Beverly Avenue Blues, you can get a digital-link to Not His Type on Amazon

This is an update and a link to a very special bonus.

Cooking With My Nanas Preview Cookbook

Thank you for your support