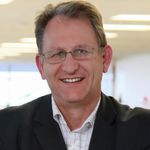 Hannes is an entrepreneur with a proven track record and interests in a number of technology initiatives, primarily focused on emerging markets.

Best known as the founder of Fundamo, the leading supplier of mobile banking and payment solutions – acquired by Visa Inc in 2011 for USD 110M, he has been instrumental in a number of other successful start-ups. Amongst those were Infomet (a SDLC methodology company), acquired by IBM in the 1990’s.

Having launched the first mobile banking solution in 1999, Hannes is often seen as the pioneer of mobile banking and has been voted as one of the top hundred most influential people in telecommunication three years in a row. In 2011 he was given a lifetime achievement award by MEF.

Your support for the book provides you with one of the first hundred digital eBook upon its release in December 2015 and an invitation to the exclusive soft-launch event.

Your support for the book provides you with one of the first seven hundred and fifty hard cover books upon its release in December 2015. The books will be presented as one of the first edition of the book. Included is an invitation to the exclusive soft-launch event.

Your support for the book provides you with the one of the first seven hundred and fifty hard cover books upon its release in December 2015 and an invitation to the exclusive launch event in Cape Town in person, where you will receive your customized book and join in the celebrations. The specific date of the event would likely be December the 3rd.

Your corporate support for the book provides you with ten of the first seven hundred and fifty hard cover books upon its release in December 2015 and a special acknowledgement in the book.

Cash In Cash Out

Embed Cash In Cash Out

Received from one of the Fundamo employees when told about the book launch:

"Thank you for including me in this wonderful story. I'm not sure if you even remember me, but I too bought completely into the idea of bringing financial inclusion to the underbanked. I still remember watching those promotional videos in Skywalker in Plein Street, showing so clearly how our product had touched and enriched lives – lives of simple dollar-a-day people, and it moved and motivated so many of us.

As for final thoughts, I would say two things –

Firstly – in 25 years of working in IT I have never experienced a company where the people are more like family than colleagues than at Fundamo – if ever there was a Band of Brothers this was it. In fact there is photographic evidence of this - the entire company posing on the Plein Street lawns so that a Nihilent contractor could take a keepsake home with him – a photo of all of us that he'd worked with and grown to care for.

Secondly – just maybe the story isn't over. I mean as people we tend to seek out the familiar, so as we disperse we'll seek out similar markets and products, taking our ideals and experience and the Fundamo Zeitgeist with us."

Why I'm Writing This Book

I founded Fundamo in 2000. Fundamo is the leading supplier of platforms to bank unbanked people in emerging markets. Fundamo was sold to Visa Inc in 2011 for USD 110 million and I joined the Visa executive team.

Since I left Visa in January 2014, I started a process of reflecting on the Fundamo journey. I started reading old documents and spoke again to people that I worked with during the past fifteen years. As I started taking notes, I realized that there are much that can be learned from this journey and I decided that I should share this journey with others, but that I should do it in a humble and entertaining way. In the process I started writing a book.

I think that this book can help entrepreneurs to do better at starting high-impact, technology businesses in emerging markets. Emerging markets are different in many ways to established markets. There are more risk, more unpredictability and less support, but at the same time, there are more problems to solve and more business opportunities. I hope that this book will help strengthen this message, so that more investors and more brilliant minds will get involved with the unique opportunities in emerging markets.

I am very confident that this book will find a market, but by using Publishizer as a pre-launch platform, I hope to gather support and awareness to a project that is very important to me. Not only would I like people to commit to buying a copy, but I would welcome any thoughts and advise that I could incorporate in the book when it ultimately gets published.

How I'm Planning To Publish

I am working towards a plan where the book would be available by the end of the year. I intend publishing the book in hard-cover as well as prepare a version that can be published for e-Readers.

The book would likely be more than a 100 000 words when it is complete. Currently the framework for the book is complete with about 80% of the manuscript written and edited. It is likely that there will be pictures and photos in the book.

I intend raising enough money to ensure that I can self-publish the book if needed. Alternatively, sufficient support for the book would help me finalize an agreement with a mainstream publisher.

After the book has been published, I plan to launch it with a special event in Cape Town. Afterwards, I intend to visit key markets where the story plays out, with an intention to promote the book.

What Will Be In The Book

The book is the story of Fundamo (since inception in 1999, till after acquisition and integration into Visa during 2012). The book consists of seventeen chapters. Below is a brief summary:

Who This Book Is Written For

The primary audience of this book is people involved in the mobile banking industry in emerging markets: executives, specialists and practitioners – in countries like India, Pakistan, Nigeria and South Africa. (People working for both large companies – banks and mobile operators, as well as small entrepreneurial companies)

A secondary audience consists of people working with start-ups and interested in exit strategies. This would range from executives in large listed companies, investors and advisers interested in the acquisition of businesses in emerging markets to students considering a career as an entrepreneur.

Anybody that likes to read true stories about business and journeys of perseverance would also enjoy the book.

The book would appeal to experts in the payment and banking industry as it discusses the evolvement of mobile payments and how that could (are busy) changing the face of payments (and banking indirectly). It has been shown that an evolution from a cash based economy to
an electronic payment economy increases the growth rate of the economy. Anybody interested in how emerging economies could grow, should understand the impact of mobile payments on the growth of economies.

Hannes van Rensburg is one of the pioneers of mobile money, having deployed the first such system in 2002 in Zambia. He is often referred to as the “father of mobile money". He received many accolades for his work in establishing the mobile money industry. Among others are:Hannes van Rensburg founded Fundamo in 2000, and was the CEO till it was acquired by Visa in 2011. Fundamo was recognized as the leading supplier of mobile money platforms. After acquisition by VISA, Hannes was appointed in VISA as Senior Vice President responsible for Sub-Saharan Africa as well as technology innovation in emerging markets.

Hannes's blog on mobile banking was one of the prime references on the industry. With regular entries since 2006, it had a large readership from all over the world. His twitter account has 6 500 followers and he has published guest blogs on a number of sites.

He has been referenced in various newspaper and other media reports and has been interviewed on CNN as well as SABC Morning Show live. He regularly speaks at events and conferences and has frequently been invited as the key speaker.

“No, I don't have any clue what it should be but I want you to resign from your position as CIO and solely focus on this. Think about it over the weekend and give me your answer on Monday" Marinus continued. "Kobus will take over from you."

I sat there stunned – speechless – in total shock – Being the Sanlam Group CIO was a big deal to me. I've worked hard to earn this prized position and was at a peak in my career. The industry took me seriously and I was going places. Give this up for something he does not even know himself what it should be?

Was I a crappy CIO and was this his way of giving me an easy way out? My mind was racing as I tried to figure out where this conversation was going. I've had many challenges in my career where I had to make quick decisions but this tops it all – quick – major – highly uncertain – I could be pulling my own plug.

Four years later he qualified as actuary through the Faculty of Actuaries in Scotland furthering his remarkable career. At age 28 he became the youngest member of Sanlam's general management and advanced to becoming the executive director of Sankorp in just over ten years. By 1991, he served as Sankorp Deputy Chairman and Chief Executive and the honour of Deputy Chairman of Sanlam was bestowed upon him in 1993 and that of Executive Chairman four years later in 1997.

His first big achievement was the demutualization and listing of Sanlam Limited on the Johannesburg Stock Exchange (JSE) in 1998.Under his leadership, Sanlam went from strength to strength rising as a financial giant – shedding bureaucracy of the past – converging into a purposeful, focused and transparent organisation. Marinus left an enviable legacy within the South African business sector and his contribution and influence was immense.