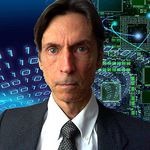 J.L. Mee is the founder of Future Life Institute, a research center which provides humankind with greater knowledge and understanding of consciousness.

On July 13, 1969, J.L. Mee had a 6 hour out-of-body experience in meditation, during which he reached over 100 times his normal level of awareness.  He spent the next 45 years trying to answer 3 questions:

1.  Where was all that awareness hiding?

After 20,000 hours of research, he found the answer, and developed the world’s first mathematics of consciousness – cognitive physics.  This new branch of science enables researchers to treat consciousness in quantitative terms using scientific equations for the first time in history.  This landmark discovery represents a cardinal paradigm shift in neuroscience.

The cognitive enhancement technology this book introduces is grounded in the author’s deep and pragmatic understanding of engineering.  J.L. Mee is one of the architects of the Information Age.   He has worked at the very highest echelons in the computer industry, and held management responsibility for evolving large computer architecture into the massive, microprocessor-driven parallelism at the heart of today’s machines.

He is the father of a mainframe, having managed the engineering development of a leading-edge, high-tech large computer system.  He directed major computer systems R&D programs for IBM's largest competitor, where he secured $400 million in investment funding and managed 20 advanced R&D programs.  These programs resulted in 13 U.S. patents and $5 billion worth of large systems computer products.

The author is donating all proceeds from sales of Cognitive Engineering to Future Life Institute, a non-profit research center dedicated to expanding the frontiers of human knowledge.

+10 signed and personalized limited edition hardcover books with holographic certificate of authenticity.
+Recognition on Future Life Institute web site and annual reports.
+ Introduction to the Institute’s board of directors.

Building Higher States of Being

You can enjoy effortless permanent higher consciousness, free yourself from compulsive thinking, and live in continuous awareness-of-awareness for the rest of your life.  Read this book and discover how genetic cognitive upgrades for higher awareness could be feasible as soon as 2020.  Act now.  Join the vanguard of dynamic visionaries at the forefront of this exciting new technology and prepare to harness its transformative power to change your life.

Combining recent advances in cognitive science and genetic engineering can produce sustainable higher states of consciousness. In short, it is now feasible to program higher consciousness into human DNA.

Widespread application of this technology can enrich humanity’s cognitive potential, opening the way to a golden age of wisdom, and fostering accelerated progress in the arts and sciences. The opportunity to lift the human race into universal self-awareness represents a defining moment in the progress of civilization.

Genetic upgrades for higher consciousness are feasible with current technology and development is underway.

A new epoch in human history is dawning. The human race is standing at the threshold of a Genetic Age. Genetic engineering can enhance cognitive faculties such as mental acuity, awareness and intelligence, and physical attributes such as appearance, strength, and agility.

The previously-unfathomable mechanisms of gene interaction have been penetrated by a revolutionary laboratory technique called CRISPR. This development is a monumental landmark in the history of biological research. Its impact on human civilization is being compared to the steam engine, which gave rise to the Industrial Revolution, and the transistor, which spawned the Information Age.

We are witnessing the emergence of a new kind of wealth – genetic capital. This new form of capital will create value in a myriad of applications across agriculture, energy, health and industry, but perhaps its greatest potential for value creation lies in cognitive capital.

Defined as the measure of an individual’s free, unbound conscious awareness in present time, cognitive capital is the source of all cognitive talents including creativity, focus, compassion, motivation and mental acuity.

The world today is shifting into a knowledge economy where cognitive capital is the prime currency. In the 21st Century, the ability to marshal this precious resource for creative problem solving will determine the economic mobility of individuals and the wealth of nations.

New research has revealed vast reserves of human cognitive potential buried beneath layers of unconscious memories, thoughts and behavior programs. A revolutionary technology for unlocking this potential to generate stable expanded states of awareness, called cognitive engineering, has arisen at the confluence of two new branches of science, cognitive physics and genetic engineering.

Cognitive physics reveals seminal new discoveries about the nature of awareness and its interactions with human neurology. These insights yield genetic engineering strategies for optimizing the brain’s neurological substrates for cognition.

Societies, groups and nations which embrace this disruptive new technology can harness its vast potential to drive exponential growth in cognitive capital.

6. Cognitive Neurogenetics – Gene therapies for stable higher states of being

The primary cognitive engineering market is adults between the ages of 20-29, since young people are open to new ideas and change. Of these 42 million young adults, 19%, or 8 million people, are actively interested in expanding their consciousness, according to U.S. Gallop polls. If 1% of these individuals purchase books or e-books, the domestic sales volume would be 80,000 units.

The outer limit of U.S. demand for genetic cognitive upgrades is $40 billion. A biotechnology enterprise is being organized to address this opportunity. Initial reactions in the financial community are favorable. Overall investment in gene therapy is booming. According to The Alliance for Regenerative Medicine, public and private genetic engineering companies raised $15 billion globally in the last two years alone.

The biotech company will develop genetic engineering solutions for elevating human consciousness to sustainable higher states of being. Its public relations and marketing programs will mention the book as the authoritative scientific reference guide.

Cognitive Engineering is unlike any other book available today for two reasons:

1. The development of genetic cognitive upgrades represents a turning point in the history of human civilization. Cognitive Engineering is the first book ever to disclose genetic engineering blueprints for creating a new human genotype with permanently-expanded awareness. This goal is achievable with current technology in the near term. Other books in the consciousness field discuss theories, philosophies and practices. In computer parlance, this is all software. Cognitive Engineering demonstrates how to optimize human neurology for cognition. This is a hardware change with the power to shape the course of history.

2. Cognitive Engineering discloses the world’s first mathematics of consciousness. It expresses the fundamental laws of awareness and its relationship with physical neurology in quantitative terms using scientific equations. Its axioms and formulas reveal cardinal laws governing the dynamic interplay between awareness and the material universe. These laws are conclusively validated by scientific experiments. This breakthrough represents a historic milestone in understanding how mind and matter interact with one another, and a revolutionary paradigm shift in neuroscience.