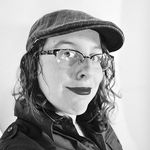 Sara Codair lives in a world of words, writing fiction in every free moment, teaching writing at a community college and binge-reading fantasy novels.

Sara Codair lives in a world of words: she writes fiction whenever she has a free moment, teaches writing at a community college and is known to binge read fantasy novels. Since she was old enough to hold a pen, words have played an essential part of her life. She uses them to fight her anxiety and see through the haze depression creates. Words are what let Sara live.

She has three complete novels that she is seeking representation for from an agent. Reclaimed, the project she is seeking funding for, will be her fourth novel, and she has two more in the works.

Sara was the second place winner of Women on Writing’s Winter 2016 Flash Fiction contest. Her short fiction has been published in many venues including Youth Imagination, Secrets of the Goat People, Spaceports and Spidersilk, Women on Writing, The Lorelei Signal and Dark Magic: Witches, Hackers and Robots, Helios Quarterly, Hermeneutic Chaos  and Ability Maine’s Breath and Shadow. When she manages to pry herself away from the words, she can often be found hiking, swimming, gardening or telling people to save the bees. Find her online at https://saracodair.com/.

One day, she may rewrite all her bios with gender neutral pronouns, but she doesn't like Xe.  They makes her feel like she is more than one person (which may be true) and that scares her.

A digital copy of the book when it is released.

$12 Early Bird Gets the ARC

One electronic ARC of the book. You will be among the first to read the final draft.

Just a signed, print edition of the book. Nothing more, nothing less.

A signed print edition of the book and a pair of sea glass earrings.
Earrings are made using genuine seaglass I found myself. All metal portions of the earnings are sterling silver.

Since each piece of seaglass is unique, not two pairs are alike. You will have the option to choose between white, green or light blue seaglass.

Buy two print copies and get one free!

A signed print edition of the book and a seaglass and sterling silver seaglass necklace. All my jewelry is made using genuine seaglass I found myself. All metal portions of the bracelet are sterling silver. Since each piece of seaglass is unique, not two items are alike. You will have the option to choose between white, green or blue seaglass.

$60 Be Magic and Put Yourself on the Page

A signed print edition of the book and a seaglass and sterling silver bracelet.All my jewelry is made using genuine seaglass I found myself. All metal portions of the bracelet are sterling silver. Since each piece of seaglass is unique, not two items are alike. You will have the option to choose between white, green or light blue seaglass.

A detailed critique of your short story (Up to 7,500) words
A signed print edition of the book
A digital copy of the book
A signed photograph of the lake that inspired it

This package comes with 50 print copies. Individually, print copies are $18. By buying 50, you get them for $9 a piece.

A detailed critique of your novel / draft
A detailed critique of your short story
Five signed print editions of the book
A digital copy of the book
A signed photograph of the lake that inspired it.
A custom piece of "reclaimed" beach glass jewelry. Or, if you are not into jewelry, I can make you a holiday ornament or sun catcher.
A minor character named after you
A shout out in the acknowledgment section

25 signed copies of the book
Detailed curriculum plans for the relevant age group including in-class activities, reading skills assignments, creative writing excercise and skype chats with your students. Alternately, we could work together to create a writing shop for adults.

So why am I writing Earth Reclaimed?

I love nature, especially the ocean, lakes, rivers, and estuaries. I’ve always had a sense that the earth is more than just a big ball of rock floating in space, but sleeping organism.

Nearly all my writing is speculative, answering some kind of “what if?” question. In this case, it was “What if Earth woke up and wasn’t happy with what human’s had done? What is she reclaimed herself and the being She shelters? What would the lake I live on look like if this happened? What would become of New England? What would become of the whole planet?”

Speculating about those questions gave me a world. I populated it with non-binary characters who like myself, do not conform to binary gender identities and with people who would have a problem non-binary folks. My main characters have a connection to the Earth and respect her, but other characters are bitter and angry. They want revenge against Earth for killing so many people in her attempt to take control.

I have questions to explore, characters I can relate to, and conflict – three ingredients I need to make a novel. This one is closer to my heart than some of my other projects because the world was inspired by some of my favorite places. It even features the Boston Whaler that has been in my family for three generations. It’s a story that screams “Sara!”

So far, I am loving the freedom that the secondary world gives to invent new towns and make my own maps instead of being limited by existing geography.

Even though I’ve planned out specific plot points, I’ve had plenty of discoveries as I wrote. There are giant jellyfish that visit harbor’s just before dawn, salt marshes that are sentient and can manifest their spirit in almost human form, some forests won’t allow humans to pass on foot, and the bay really cares about the people who fish in his shores.

The plot is building, I’m getting to know the characters, and having a blast with the description.
The draft is coming along quickly, and should be done in two weeks when my Publishizer Campaign closes.

I wish I could say my campaign was going as well as the novel. I’ve only gotten five pre-orders, and have less than two weeks left. My goal is 500, but not meeting that goal won't stop me from publishing this book.

The more pre-orders I get, the more likely I am to attract a good publisher. If I don’t get an offer from a publisher I like, I will self-publish, and use the funds I raised to hire a professional editor and designer to make it look good and pay for advertising so the project can reach as many readers as possible.
My ultimate goal as a writer is to succeed through traditional publishing, but that doesn’t mean I can’t travel other paths in the process. Self-publishing will give me a lot more creative control with this project, and frankly, that is not bad thing.

Either way, I need more pre-orders to make it happen!

And for those of you who have already pre-ordered, THANK YOU!!!