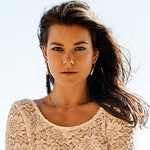 Lana Baumgartner completed her Bachelor of Arts in Interdisciplinary Studies at California Institute of Integral Studies (CIIS) in San Francisco, California; the very first University to pilot a certificate program for Psychedelic-Assisted Therapies, also known for it’s holistic approach to formal education: bringing concepts of spirituality, consciousness, and personal growth in balance with professional development, critical thinking and academic rigor. Since the late 1960’s, CIIS has upheld the standard of cutting-edge concepts and social good; a university focused on redefining the norm, acknowledging significance of relationships, and cultivating thought leaders. Armed with this powerful formal education, Lana answered the call to bring a paradigm shift to a supposed clandestine industry.

Lana’s upbringing was shaped by the divergent thinkers of her immediate family. An activist grandfather who Founded the American Cannabis Society. A modern day witch as a mother, who practiced Herbalism, and brought young Lana to seminars exposing the corrupt American Medical system, touting “no disease is incurable.” A 100% disabled Marine Viet Nam Veteran uncle and mentor, practicing Eastern spirituality and meditation for over 40 years, and maintaining unheard levels of health and wellness into his mid-seventies. Lana’s father is a four-time convicted felon, who drastically changed the course of his life through spiritual practices, and plant medicines after being incarcerated and absent for most of Lana’s youth. She followed the family trend and defied all odds, and set a standard for herself, to cultivate a daily practice of optimal health and holistic living, and travel the globe in effort to develop an altruistic worldview. She’s traveled to six continents, and spent a cumulative of seven years outside of the U.S. She is a trained dance instructor, yoga instructor, Reiki Practitioner, massage therapist, Kambo practitioner, certified Life and Recovery Coach, and has studied Tantra for the past eight years.

Writing has always been a passion of Lana’s. From early elementary school extracurriculars, to the high school newspaper and onto her own personal blog, “The Sensual Foodist;” where she writes about the role of nourishing food in the bedroom, and between lovers. This concept gained interest from individuals seeking support in intimate relationships, which developed into a co-authored book: Conscious Love: Enlightened Relationships and Soulful Sex 11 Love Experts Reveal Their Secrets, published in 2016. Lana’s articles as the Sensual Foodist can be found on GoodMenProject.com, Sakara.com, RealFoodsWitch.com, and various sites about holistic living. She’s a writer and the Co-Founder of PsychedelicTimes.com, PureKambo.com, and LanaShay.com. She’s appeared on reality T.V. for her contortionist-like abilities, performed as a contestant on American’s Got Talent, has graced billboards across America (covered in body paint), and is an internationally published model.

Industry Workers:
+ 15 minute coaching session to earn more $$$ as a conscious sex worker
**This bonus is worth $200

- PLUS 60 minute coaching session to earn more $$$ as a Conscious Sex Worker
Couples: Navigating the Sex Industry while in an Intimate Relationship with Joe Mattia and Lana

Industry Workers: 60 minute coaching session to earn more $$$ as a Conscious Sex Worker
Couples: Navigating the Sex Industry while in an Intimate Relationship with Joe Mattia and Lana Baumgartner

Industry Workers: 60 minute coaching session to earn more $$$ as a Conscious Sex Worker
Couples: ​Navigating the Sex Industry while in an Intimate Relationship​ with Joe Mattia and Lana Baumgartner

Industry Workers:
+ Five 30 minute coaching sessions with Lana and Joe (Lana's husband and mentor), to start a career in the industry or earn more $$$ as a conscious dancer
+ Email and text support

+ Ten 30 minute coaching sessions with Joe and Lana learning Tantric techniques and practices
+ Invite to Virtual Live Q & A with Lana
+ You'll also get an exclusive invite to the book launch party when the book is published. Where Lana will be signing copies and likely swinging around a stripper pole.
+VIP experience in person (or virtual)

Industry Workers:
+ Ten 30 minute coaching sessions with Lana and Joe (Lana's husband and mentor) to start a career in the industry or earn more $$$ as a Conscious Sex Worker or Dancer
+ Strategy sessions to reach $1000+/night
+ Email and text support
+ One night of on-site training: Location dependant (or virtual live support)

Thank you SO much for your support. The campaign is now complete and we hit the goal of 500+ preorders.

I can't thank you enough. I'm so ready to complete this book, and share my story!