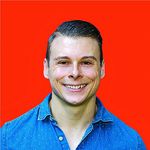 He also Founded Command Your Brand Media. Being a podcast enthusiast for over 10 years and now a top-rated iTunes podcaster, with 600+ episodes under my belt, in addition to his partner having over 10 years of public relations experience, they have become an unparalleled pair that knows how to harness the Power of Podcasting™.

His team has launched and produced two, iTunes Top-Rated Podcasts and booked clients on 500+ podcasts as expert guests.

Receive 1 copy of the limited edition first print run of the book.
Receive special updates about the book as it’s created and access my Facebook community with entrepreneurs and influencers accelerating their digital presence.

Receive 2 copies of the limited edition first print run of the book + be the first to receive the Audiobook version once completed.

Receive 10 autographed copies of the book to share with your community + be the first to receive the Audiobook version once completed.
Get the Celebrity Booking Masterclass completely free:

There’s an exact technology to booking celebrities and well known public figures on your podcast. In nearly 800 interviews I’ve interviewed some of the highest performers in the world. These conversations can help to build your credibility, reach, and value of your podcast.

In this masterclass, you’ll learn exactly how to book celebrities, public figures, athletes, and rock stars on your show. We’ll cover not only who to talk to, but how to talk to them and create a relationship that leads to other celebrity guests.

Receive 20 autographed copies of the book to share with your community + be the first to receive the Audiobook version once completed.
Receive a customized Podcast Makeover:

We truly have reached the Golden Age of podcasting, with now over 1 million shows world-wide. A podcast can be a powerful tool to not only take your brand to the next level but also networking with just about anyone. If you have had a podcast for some time, but are not seeing these benefits, then this is for you.

This is two, one-hour personal coaching sessions where we will go over your podcast in every detail: publishing calendar, audience, growth strategies, branding, and everything you need to have the best version of your podcast. When you walk away, you’ll be set up for next-level podcast success.

Receive 50 autographed books to share with your community + be the first to receive the Audiobook version once completed.
Receive The Entrepreneur Accelerator:

Getting the right media attention can catapult you to the next level, The fastest way to do that is by taking advantage of appearing on top-rated podcasts. My team at Command Your Brand has booked nearly 4,000 interviews for some of the top entrepreneurs on the planet.

My team will hone your audience, create a full media kit, media page, and also book you on 3 top-rated podcasts to help catapult your brand.

We've sold almost 100 books in the first week! Also, two of you have grabbed the audio book which is now available! I wanted to share one of the Extraordinary Stories that we'll be featuring in the book, my favorite baseball player, former New York Yankee, Nick Swisher:

Nick Swisher wasn't drafted to play baseball out of high school, most big name players are...

Being the son of a former big leaguer, he understood that baseball was a business.

Nick's career The Ohio State University was a thing of legend. To that point, the baseball field there is now named Nick Swisher Field.

After, school, Nick was then a first round pick to the Oakland Athletics.

In 2009, Nick put on the New York Yankees pinstripes and rode the bench, in fact his first appearance was in a mop up pitching opportunity.

He still reminds Gabe Kapler he struck him out to this day.

Once he got his chance to play he became a team leader - helping the Yankees to win the World Series that year.

His secret? Always staying positive and looking for the brighter side of things.

Does he have off days? Yes, but he always tries to wake up a winner.

Thank you SO much for the support!