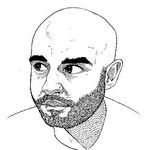 AD Robles is happily married to Brittany. Together they are raising three sons in the great state of New Hampshire.

AD Robles is a conservative Christian living in the state of New Hampshire with his wife and three young sons. He grew up in a conservative Christian household but came to faith as an adult when he lives in New York City and worked in technical consulting/talent acquisition on Wall Street. Shortly after his conversion, he moved to Vermont where he took up the preaching duties of a community church in Middletown Springs and subsequently planted a church in Rutland, VT.

After the election of Donald Trump in 2016, he noticed an alarming trend of overtly progressive ideas being preached from formerly conservative pulpits around the country. In particular, the issue of race, caught his attention since he is 100% Puerto Rican. Since then he has grown a YouTube channel and podcast solely dedicated to the rise of race/gender-focused "social justice" nicknamed the "woke church," and the biblical answers to this error, which many see as the most significant threat to the gospel of Jesus Christ in a generation.

40 copies - be a guest on the podcast/youtube channel in an "Ask Me Anything" format.

Thank you so much for everyone who preordered a book. I am currently hard at work to make it the best product possible. I wanted you all to know that I sent a couple of sample chapters to a few publishers and it generated instant interest. I decided to sign an agreement with Morgan James Publishing out of New York City!  Not only are they willing to do a book like this which is likely to generate.......some spirited discussion. BUT they also seem to understand intimately how to market books like this which hopefully will get it in more hands.  Stand by for more updates in the future. My goal is to have this in your hands as quickly as humanly possible without sacrificing quality. This is my very first book project and I'm learning alot. Prayers appreciated. God bless!