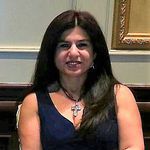 Weam Namou is an Eric Hoffer award-winning author of 12 books, a speaker, journalist, and filmmaker. She is vice president of Detroit Working Writers (DWW), a 118-year-old professional writing association, and an Ambassador for the Authors Guild of America, the nation’s oldest and largest professional organization for writers.

Namou’s book, The Great American Family: A Story of Political Disenchantment, won a 2017 Eric Hoffer Book Award and three of her memoir book series received acclaimed reviews by Publishers Weekly. Namou hosts a weekly half-hour local TV show where she interviews extraordinary and talented people who are making a difference in the world.

Francis Coppola, the director of the Godfather Saga, and the staff of Zoetrope selected Namou’s script “Pomegranate” as a 2017 quarter-finalist out of 1600 scripts. She recently completed her first feature documentary The Great American Family and is working on a feature film and focused on teaching how to achieve your dreams through writing. As such, she founded The Path of Consciousness, a spiritual and writing conference and retreat.

Namou received her Bachelor’s Degree in Communications from Wayne State University, studied fiction and memoir through various correspondence courses, poetry in Prague and screenwriting at MPI (Motion Picture Institute of Michigan). She has given readings, lectures, and workshops at numerous cultural and educational institutions and her poetry, essays, and articles have appeared in national and international journals. In 2012, she received an Outstanding Contributions to the Arts Award from Erootha, a local arts organization.

She is a certified Reiki Master, Health Facilitator, a Sikkim Guardian, an ordained minister, and a graduate of best-selling author Lynn Andrews’ 4-year course of study and training in the sacred healing art.

12copies
0 250 500 1000
Success! Mesopotamian Goddesses has already sold 12 pre-orders , was pitched to 3 publishers , and is in discussions with publishers .

Thank you for supporting my endeavor! You will receive a print paperback copy and digital version of the book.

Thank you for supporting my endeavor! You will receive:

+ 3 autographed print paperback copies and a digital version of the book and will be able to share it with two other divine individuals.

Thank you for supporting my endeavor! You will receive:

+ 10 print paperback copies and a digital version of the book

+ you will be named and thanked in the book. This will be in the book for life.

Thank you for supporting my endeavor! You will receive

+ 75 print paperback copies and a digital version of the book

+ Company logo + testimonial about your company in the book. We will make it something very special. This will be in the book for life.

+ 1 free ticket to The Path of Consciousness, a 3-day writing and spiritual conference and retreat (valued at $299) www.thepathofconsciousness.com

+ Company logo will be on yearly booklet and website for the 3-day spiritual and writing conference and retreat in October 2018, called The Path of Consciousness www.thepathofconsciousness.com

Thank you for supporting my endeavor! You will receive

+ 100 print paperback copies and a digital version of the book

+ 30 minute interview by a representative of your company on my weekly TV show which reaches 140,000 subscribers in 11 cities. The show is repeated twice a week.

+ the half-hour TV episode is then shared on social media through blogging, vlogging, Facebook, YouTube, Twitter, Google Plus, LinkedIn and Tumblr. You can add the video on your website and other social media outlets.

+ Company logo + testimonial about your company in the book. We will make it something very special. This will be in the book for life.

+ Company logo will be on booklet and website for the spiritual and writing retreat in October 2018, called The Path of Consciousness www.thepathofconsciousness.com

I want to first thank you for your interest in my latest and 13th book, Mesopotamian Goddesses: Unveiling Your Feminine Power. Your support means a great deal! I also appreciate your patience in the publication of this book which explores a female narrative that had been silenced and wiped out by historians.

The world has been negatively impacted by the efforts to eliminate feminine divinities, but we're living in an age now where we can learn from the past in order to grow into a better future. I did much research on each goddess, and poured out my heart into each less, which brought me much joy but also a delayed publication date. The book is now finally available and I'm excited to be sending you an eBook copy within the next hour and your print copy(s) will arrive within a few weeks.

I hope you enjoy reading each goddesses' story and will benefit from the lessons included in each chapter.