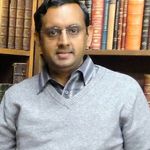 Amaruvi Devanathan (1972- ) had his childhood in Neyveli, India and qualified as an Engineer. He worked in various technology companies in India and Japan and is based out of Singapore from 2009. He is a passionate blogger and blogs in English and Tamil and calls himself 'a banker by day and blogger by night.' He has published a Tamil book by name 'பழைய கணக்கு' which is a compilation of several short stories that share a common thread - Justice. Talks are on for the French translation for this book.
His Kindle book 'Monday is not Tuesday' was released on 27-Nov-2015.
A prolific public speaker and an active Toastmaster, he is active in the Singapore Literary circuit and mentors students on writing and public speaking.

Monday is not Tuesday

Recollections of a South Indian Childhood

Recollections of a carefree South Indian childhood of the 80s and 90s when the only reason for going to school was to have fun.

Embed Monday is not Tuesday

MINT - Monday is not Tuesday - depicts the growing-up years of the 80s and 90s in an idyllic place called Neyveli in Southern India. MINT contains many funny incidents that happened in Neyveli in general and in Jawahar School - the most disciplinarian school in the district- in particular. Despite the strict rules and guidelines, we had great fun. Our only objective of going to school was to come out of the school first and rush back home on the bicycle. MINT details the life in a slower and saner world when the lack of technology was not considered an impediment.

We know that those times are not going to come again in the future. The least we could do is to go through that laid back life through the pages of MINT and probably let off a deep breath.

I am the narrator in all the stories. If I had not taken part in a story, I would have been a witness to the happenings. Hence I am the best person to narrate what I had been through, what I had seen and what all I had enjoyed in Neyveli. So I am the best fit for MINT.

The primary audience for this book could live anywhere in the world where basic human traits of friendship, love, innocence et al are valued. Indians settled in the west, especially the now high flying Indian diaspora who had had its childhood in the then un-globalized India, would enjoy the book more than others. From a social perspective, I am sure that any middle class reader, who has had a childhood when education was emphasized as the only way out of middle-class-dom would appreciate the content. USA, UK, Germany, Mexico, Brazil, India, Korea, Australia, Singapore, Malaysia, China and Japan are potential markets.

I intend to make use of my blog's audience (www.amaruvi.in) as well as my social media groups in Facebook, Linkedin and Twitter for marketing. As I am a published author in Tamil, I will also be using the services of India based book sellers and Lit-fest organizers for marketing MINT. I am a Toast Master and a public speaker in Singapore and am associated with the Indian ethnic groups. Hence I would be promoting MINT in my interactions with these associations. I am also a member of the National Library Readers Club in Singapore and hence will promote the book actively in the Reader's Club events.

An Indian news paper by name 'Dinamalar' had interviewed me for my earlier Tamil book and had featured me as a promising author. I will reach out to Dinamalar again to feature MINT and probably get myself interviewed for MINT.

MINT is being launched in Amazon Kindle on 27-Nov-2015. The anecdotes in the book were blog entries in my blog site and were well received. Past performance of the posts are certainly an indication to the future sales of the book.

I have hired a cover designer for the e-book version and also an editor to proof read the content. The interior illustrations are by my artistically inclined 10 year old younger son, Vijay.

The book has 18 interesting anecdotes.

Mahesh was always punctual. He slept at exactly the same time.

His siesta began at 2 in the afternoon when the History teacher came in and continued until 2.45 when the class ended. He never slept after the teacher left.

Mahesh didn't discriminate between subjects. He slept through all classes except PT. His sleeping habits were so camouflaged effectively that even his neighbour Kichchi didn't know that Mahesh was asleep. Kichchi and Mahesh had been bench-mates since time immemorial. They shared a unique trait. They had similar handwriting – one that could not be deciphered
by anybody in class. Even they couldn't read their scripts.

Neyveli's Jawahar School was known for trying to achieve the impossible like making students sit through History lessons immediately after lunch. Hence Mahesh, the quintessential sleeper,
could not be faulted for his naps.

That Monday it was different. Mahesh's slumber in solitude was ended by a missile that landed on his head, a pencil eraser launched from the third desk. It was Mr. Thirugnaanam, the History teacher, who had launched it. The reason for the rubber launch? Mahesh's slumber.

Thirugnaanam had asked Mahesh a question. It wasn't that Mahesh didn't want to answer – he was fast asleep. But what if he had heard the question?

He would have asked Kichchi for the answer.

When Thirugnaanam asked Mahesh a question and there was no response from the latter, he was incensed and launched the missile.

But the moment his head was hit, Mahesh was on top of the situation. He quickly stood up and responded, 'Yes Sir' only to find that there was nobody in front of him except the blackboard. Mahesh was sitting on the first bench; the missile had been launched from the third. 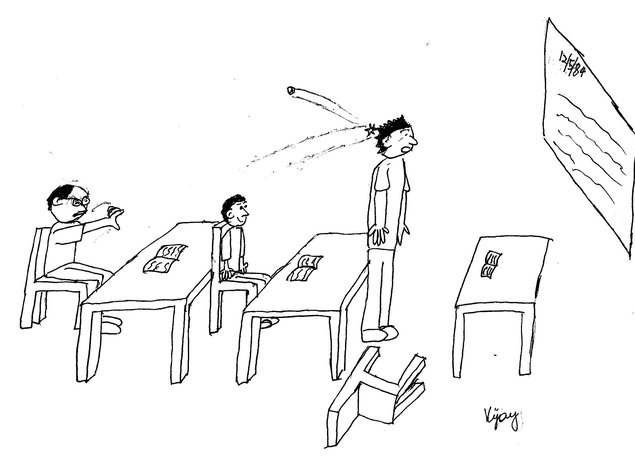 Mahesh, usually quick to gauge the situation, understood that he had been asked a question but hadn't answered. As per protocol, he nudged Kichchi, his neighbour.

The protocol was that whenever Mahesh nudged Kichchi, the latter would whisper the answer and Mahesh would repeat the same at a higher pitch, thus conveying a message to the teacher that he was not asleep.

This time, Kichchi wanted to avenge an earlier injustice that Mahesh had done to him. Yes, Mahesh, during his afternoon nap the previous day, had overshot his own notebook, wrote on the bench, reached Kichchi's notebook and started writing on that notebook too. Kichchi's page had his own hieroglyphics in addition to Mahesh's slumber driven art, thus making the page resemble war torn Afghanistan.

So Kichchi wrote 'TAJ MAHAL' on a piece of paper and gave it to Mahesh.

In a loud voice, Mahesh declared triumphantly, 'Sir, the answer is Taj Mahal' and looked at Mr. Thirugnaanam with the conviction of a film hero.

There was a momentary lull, then the whole class exploded with laughter. Mr. Thirugnaanam's tummy shook vigorously with anger and laughter.

Mahesh was confused. He looked sheepishly around while still emanating the radiance of a victorious Tamil film hero.

The question that Thirugnaanam had asked was, 'Which is the longest river in India?'