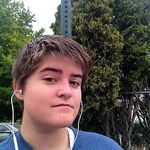 Byron Kimball is a freelance writer from Salem, Oregon who has been published in a variety of publications, including FTM Magazine. He will be graduating from Western Oregon University in 2017. PORTLAND AND OTHER MISADVENTURES is his first novel.

I'm a freelance writer from Salem, Oregon. Along with being familiar with the Portland area, I also identify as transgender, making me the ideal voice to help bring this story to life. I've been passionate about literature and writing from a young age and have been writing professionally for almost two years.

I first developed the idea behind "Portland and Other Misadventures" a year ago. The first draft was written in one month for National Novel Writing Month. The book is based both off my own personal experiences as a transgender man and the experiences of others in my community.

"Portland and Other Misadventures" is all yours and Kindle ready. You'll be the first in line (all without leaving the house) to receive a handy digital copy when the book is launched.

Two for one! Get yourself the e-book and an advanced reader copy (available before the book's official release) all at the same time. Free hugs included.

Get yourself a smashing, official paperback copy of "Portland and Other Misadventures". The best part? It'll look absolutely smashing on your bookshelf.

You'll get the paperback, my flourishing signature, and a personal note. You deserve it for being awesome.

Become a minor character in "Portland and Other Misadventures". You'll also get a signed copy of the book upon release. And don't worry. I won't kill your character off.

Portland and Other Misadventures

A transgender man moves to Portland, looking for utopia but between awkward sex, drugs, and an empty wallet, it's anything but paradise.

Embed Portland and Other Misadventures

"Portland and Other Misadventures" tells the story of Jorge Rivera, a 23-year-old transgender man, who, of course, moves to Portland, Oregon. Told in an episodic format, the book follows Jorge and his various misadventures in the city. Among many things, Jorge and his collection of friends deal with poverty, dating, a community they don't really fit in, and more.

More and more people are becoming aware of the transgender community. "Portland and Other Misadventures" comes at an opportune moment, sharing the story of a transgender man that goes beyond the typical narrative often expressed in similar works. "Portland" doesn't make a physical and emotional gender transition the focal point of the book. Instead, the book focuses on the other, often overlooked aspects of life in the transgender community, including finding community, struggles with dating, and daily life.

"Portland", of course, is also a love letter to the city of Portland itself, celebrating the culture that Portland has to offer. I'm an Oregon resident myself and would love to raise awareness of the city beyond what audiences often see in shows like "Portlandia".

"Portland and Other Misadventures" is humorous and quirky, written in a style that's accessible for a wide audience, beyond the projected audience outlined in the proposal and  is easily relatable for readers both young and old.

The book is written in an episodic style, with most chapters functioning as something akin to a short story. Taking place over the course of a year, the story follows Jorge and friends. There's, of course, recurring conflicts throughout- Jorge comes out to his family, he tries to find love, and so on.

A full chapter outline is in progress. The final book will be approximately 70,000 words.

"Portland and Other Misadventures" is ideally suited for college-aged readers, many of whom may identify with the LGBT community. But the book is accessible to a wider audience, due to covering universal themes such as growing up and finding one's place in the world.

More and more people are aware of the unique issues that affect the LGBT community and "Portland and Other Misadventures" uniquely offers something new to readers- a book that explores LGBT-related themes while offering a diversion from typical stories in the genre that simply focus on a character's self-exploration or "coming out".

Readers will appreciate the book's strong, quirky sense of humor and the book's vibrant cast of characters.

The author will also compile additional marketing strategies, taking notes from his experience with SEO marketing.

Similar titles include the following:

* "Tale of the City" by Armistead Maupin (Harper * Row)- Like "Portland", "Tales of the City" follows a large cast of diverse characters, trailing their misadventures in the city of San Francisco. The book and its various sequels are also written in a more episodic style.
* "Nevada" by Imogen Binnie (Topside Press)- "Nevada" features the story of a transgender woman. Like "Portland and Other Misadventures", "Nevada" strives to offer audiences something new- a story where the transgender protagonist's transition isn't the plot of the book while still playing true to the authentic experiences of the transgender community
* "Juliet Takes a Breath" by Gabby Rivera- "Juliet" also focuses on the queer community in Portland and tells the story of a teenaged lesbian feminist over the course of one summer. While both stories are coming of age books focusing on LGBT-identified protagonists, "Portland" propositions itself as being accessible to a more mainstream audience and is oriented for older audiences.
* "Aristotle and Dante Discover the Secrets of the Universe" by Benjamin Alire Saenz- This book tells the story of two gay Latino teenagers and their coming-of-age. (Absolutely beautiful story, by the way). Like "Portland", "Aristotle" takes place over a long period of time and focuses on questions about finding one's place in the world.
* "Will Grayson, Will Grayson" by John Green- This story about two best friends with the same name tells the story of a gay man and is written in the same humorous, poignant style that "Portland" is.