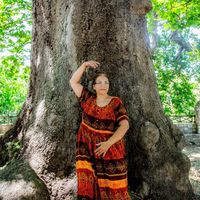 Christiana Gardikioti is a woman of pathos, vision and boldness. A charismatic orator educated in Greece and in Canada first in theatre, then in education and last but not least in business administration. She experienced varied career paths: Radio Station program director, French Immersion Teacher and Account Executive in Canada's leading Financial Services firm. She worked both with children and adults constantly juxtaposing her creativity inclination to the business savy required for surviving the hurdles of top business positions.

Upon her return to Greece after 23 years in Canada and the U.S she worked in the Securities Trading and Investment Firms environment. Soon she realised the pursuit of money was making people and herself "pseudo happy". Deep down individuals worldwide sought "genuine happiness". Monerary acquisition did not secure or lead to it. On the contrary urban fast lane career tracks lead to a dissalianation and emptyness. A "lost soul" syndrome felt by many.

Christiana, as oftern others do, discovered meaning in purpose! However purpose had to be also be profitable or at least secure a dignified living nowdays to sustain its pursuit for years to come. So she asked hersef: - How about if people produced IN NATURE... FOR NATURE... occupying themselves with something they were passionate about and at the same time preserve planetary wellness? A voice ansered her! It was Mountain Parnonas' call! The seemingly impossible task under the Greek crisis circumstances: to render its 24 diserted villages productive again with the help of technology. The "Meraki people" group appealled to the essential yet suppresed needs of humans in search of "something meaningfull to do in theif lifetime " that was filled with passion!

She thus engaged entrepreneurially to re-establish "PRODUCING WITH HEART" as means of regenerating economically and culturally the region by prototyping the first village. The village of Agiannis Kynourias that her father had left 70 years ago in search for a better life in the CITY of ATHENS. Noteworhty to say he was taken to the orpanage as his family lost everything to loan sharks! Dimitrios had returned 35 years later victorious establishing the biggest Textile Factory in the Region that eventually closed down as a result of Govermental Industrial Policies followed. The coming of the factory revitalised the local economy. Its shuting down after 25 years left Dimitrios devistated by its closure and the region without major production activity.

Christiana gave Dimitrios a promise right before he died: to call upon other humans, academics, students, entrepreneurs, farmers, professionals, goverment administrators and locals particularly all creative minds willing to undertake the challenge of seeking a new societal order via Earth's stewardship so numerous opportunities for employment will be created again. Mt Parnonas would thus become Nature's Fisrt Factory. She invites thus any reader to become part of the "Meraki people" business ecosystem and at the same time pursue a fullfilling career.