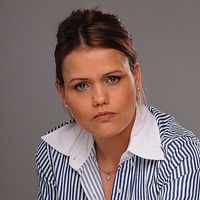 If you wished to find a real example of truth being stranger than fiction then Jillian Haslam would be very good choice. Born in Calcutta to British parents in post-colonial India, Jillian faced a bruising childhood of extreme poverty, malnutrition & disease. She lived through the deaths of four siblings and some appalling instances of racist abuse. Her rise from the depths of despair and misery to wealth and international celebrity status is an inspirational story of vindication and coming home. If anyone knows what it takes to rise above circumstances and seize control of one’s life, she does.

Jillian Haslam (dubbed 'the real Slumdog Millionaire') is an author, speaker and philanthropist. Since moving from India to the UK in 2000, Jillian has turned her attention to learning how she can help others overcome challenges in life the way she has. With the initial publication of her book, Indian.English. Jillian has received a substantial amount of media attention, invites to various speaking events and even an offer from Hollywood.

Recently updated and seeking a new publisher, the book reveals the real essence of her life. The story is now also scheduled to be turned into a Hollywood production and has won the best screenplay award at the Monaco Film festival in the epic & historical category.

The essence of that indomitable spirit can also be found throughout the pages of her second book, The Irrepressible Mind.

A harrowing yet ultimately redemptive story of an India.English. girl growing up in post-colonial India, in the squalid slums of Calcutta.