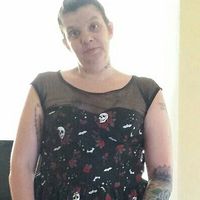 Alyss started writing when poems when she was 14. She has written over 2,000 poems and several short stories before entertaining the idea of trying to get published. She started writing her first novella in 2015. She was influenced and encouraged by Paul A.K.A. Monoxide and Jamie A.K.A. Madrox of Twiztid to get her works published. She self-published her first book The Monster Within March 2015. It is a collection of thirteen dark short stories.
Alyss J. Anderson is the pseudonym she writes under. She was born and raised in Pennsylvania. She is currently residing in Michigan. When she isn't writing she is enjoying the outdoors. She enjoys walks in nature. Some of her influences on her works are: Stephen King, Dean Koontz, James Patterson, Twiztid, Blaze.