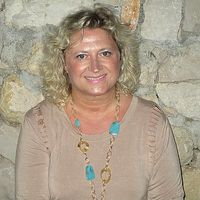 The journey from being a school teacher to an award winning author for Aida Zaciragic jumpstarted when her growing interest in children's fairy tales provoked her creativity to yield a pen herself. Finding interest in different realms of life revolving around her past, present and future, Aida's fairy tales display her love for the genre. Critics describe her style of writing as "beautiful" however they often compare her novels with that H.C. Andersen's because of frequent references to forgotten legends in her fairy tales.
Though Aida has been residing in Sweden for the last 20 years, her birthplace travels back to Bosnia and Herzegovina that was once been inhabited by kings during the Middle Ages. As a child, she had frequently heard stories and legends about these kings that had facilitated her imagination process from such a tender age. Years later, her imagination found words in her fairy tale, "The Kingdom of White Lilies" which revolves around the life of last bosnian qeen Katarina Kosača and her children. The fairy tale is considered to be one of the most beautiful assets of Bosnian literature and its second part called "The Law of Freedom" won her an award at the Sarajevo Book Fair in 2014.