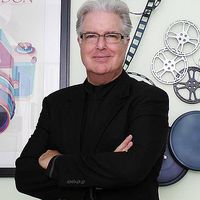 As a producer and director, Domenic Fusco has traveled the globe producing world-class projects from concepts to copies. His impressive roster of clients include stars of stage and screen, music icons, sports legends, super models, corporate leaders, presidents, kings, and spiritual luminaries. Additionally, Domenic is a motivational keynote speaker, teacher, and author of numerous books and articles.

The support materials Domenic has developed during his career and ministry have been invaluable resources for his former students at the Art Institute of Atlanta, and currently for his on-line and FamFlicks following. Numerous interns, fledgling production companies, churches and ministries have profited from Domenic Fuscos’ servant heart. His hands-on approach prepares and inspires the people of God - and most urgently the artists and media community - to professionally and spiritually meet the social media and communication demands of the 21st Century.

For forty-five years as partners in marriage, business, and ministry, Domenic and Charlie Fusco have blended their talents, skills, wisdom and faith- based vision to exemplify the virtues of true success to the glory of God. The Fuscos are founders of Visible Light Ministries and Image Artistry Video and Film.
www.articlesoftransformation.com.