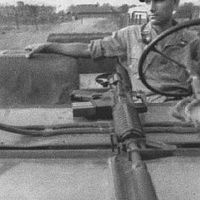 Three months after “Chip” is created, when he is the size of a three inch banana and his “eye buds” are forming, his mother tries to commit suicide. The rest of his gestation is “distressed” and he is born premature with his left eye points up & to the extreme left. (strabismus)
His unpleasant mother is greatly disturbed, and cried that Chip is a spawn of Satan sent to ruin her comfortable and wealthy diplomatic life. But Chip’s father, a young super star diplomat in the Marshall Plan, gives Chip his love, and takes him to London for many dangerous eye operations. They play “Light & Dark” baby games together, and become very close with a near-psychic ability to communicate. His father tells him a million times: “You may have a bad eye, but your brain is just fine!” Chip believes his father, and soon teaches himself how to build flying model airplanes by self-education.
When leaving Brussels for Manila during the Hukbalahap Rebellion there, Chip’s father is afraid the Europeans will believe America will forget Europe and their great dream to change into a war-free European Union. To assuage their leaders of these fears at his farewell garden party, Chips father persuades him to play Mannequin Piss on a pedestal to everyone’s amusement. It is Chip’s diplomatic debut.
After contracting Polio in Manila, Chip’s family moves to McLean, Virginia, and live in a wonderful house surrounded rolling and beautifully forested hills west of Washington. It becomes Chip’s magic Garden of Eden. When he is nine, in August, 1957, he saves his father’s career by persuading a Vietnamese leader to return to a South East Treaty Organization party in their family home. The leader had become outraged, and demanded the conference immediately end. Nobody could bring the leader “back” to the gathering, and Chips father was faced with becoming “the man who lost Vietnam”, a career killer. Then Chip does a weird rotating left eye trick he had taught himself, and leads the leader back to the party. The next morning Eisenhower hears at his breakfast CIA briefing that “Foreign Service Officer Ben Wood’s retarded son saved the conference with his magic left eye.” Chips family moves to Vietnam where they eventually learn America will soon go to war, lose, and try to use nukes at the end. Chip decides to become a low-profile anthropologist, teacher, and private diplomat.
One day his first girlfriend suddenly tells him: “OMG, Chip, you are actually smart!” He believes her, and becomes smarter. In May, 1963, Chip creates the logos, name, business & artistic properties for what becomes the band “The Grateful Dead, and entrusts into the hands of Robert hall Weir who later, with Chip’s brother, totally betrays Chip’s interests. In 1966, Chip takes a Topology IQ test and scopes over 160. Chip’s father’s career, he had been Kennedy’s Vietnam adviser, is, after Dallas, destroyed by Johnson. Chip’s acceptance to U. Colorado vaporizes, and he must enter the Army for the war in Vietnam.
While training in Georgia, Chip meets Hamilton Jordan, and creates for him a plan to make his boss Jimmy president so he can start a Mid East Peace process, recognize China, and win a Nobel. Chip becomes an outstanding military leader, and a decorated combat veteran Green Beret “A” Team Commander. Just before leaving Vietnam, Chip creates a plan for a fellow Black Panther Green Beret from Chicago to go home, and create a champion black basketball player that speaks good English, then a champion black golfer that speaks better English then the golf commentators, and then America’s first black President. It works.
Back in America, chaos reigns. Chip races Motocross, then enters a yoga monastery. Chip’s father is murdered by interests controlling the revenues of the Grateful Dead Band, and Chip is threatened with murder by Phil Lesh. Chip moves to Nanjing to teach English, and improve Chinese/American relations, and becomes famous there. etc, Etc, ETC !
:- )