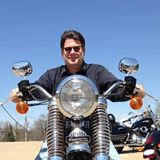 Accomplishments:
Plenary: "Should Your Organization have an App" at ACLEA, Austin, TX; January 2014.