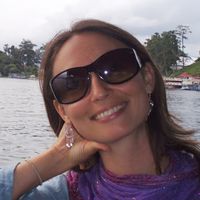 Melinda’s work has been published by The Associated Press, The Jakarta Post, WEEKENDER magazine, Jakarta Globe, Expat/Kabar, Asia Dreams, Reason magazine and local newspapers across the USA. In 2002, she won 2nd Prize in the Felix Morley Journalism Competition and in 2004 traveled to Africa as a Global Prosperity Initiative Journalism Fellow. In 2007, she earned a Master of Science degree in International Development from Tulane University and became a Fulbright Fellow in Indonesia the following year.

Becoming Home unfolds against the backdrop of contrasting cultures—eastern and western, traditional and modern. It braids together my experiences of Bali, of pregnancy and birth, and my own very personal ...