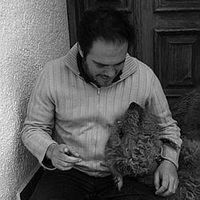 Gustavo Vázquez is a multi-published author in Mexico who started as a novelist but has dedicated lately to science divulgation for the general public. His books "200 useless facts to read in the bathroom", about science in general, and "Why do we enjoy sex so much?", about the prehistory of sex, were best sellers in Mexico, selling more than 7,000 copies each. For his most recent title he shifted focus to the history of his country, with "Everything you ever wanted to know about the presidents of Mexico", written in his habitual amusing but informed style, and was presented at the International Book Fair of Guadalajara.

He became interested in Bible criticism in New York, after attending a seminary with renown biblical scholar Marcus Borg, and has written extensively about religion, Bible criticism and the critical historical method of reading the gospels since 2002. He produced the first ever translation to Spanish of the Gospel of Judas, found in 2006, which has been used by several websites. "What they didn´t teach me at Sunday school" is available in Spanish as "Lo que no me enseñaron en el catecismo", where it has been positively reviewed. His intention is now to make this book available to English-speaking readers.