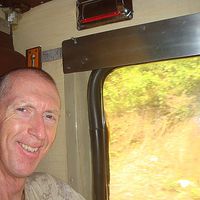 Lindsay Boyd is a writer, personal carer and traveller originally from Melbourne, Australia. He has a varied and colouful life and work history, especially since becoming a world traveller in his late twenties. During the time since he has visited more than sixty countries all over the world and has had the opportunity to live and work in many of them, mostly as a personal carer to homeless people, disabled people and refugees in intentional community settings.
He fell in love with writing and books at a young age and views the written word as a supreme means of communication, an unparalleled way to put across ideas and feelings. He likes most of all to create believable characters. A good story is essential but it is the characters who drive his plots. Of special interest are so-called 'outsiders', people who are regarded as 'different' within the context of the wider society. Through his writing he hopes to convey to them that a sense of belonging is achievable in this world.
The close interaction with others gained as a carer in communities has been invaluable for one whose premier interest as a writer is people, what they dream about and how they measure up in terms of reconciling their dreams with cold, hard reality. He feels the contact with a wide range of diverse personalities has made him accepting, able to take others as they come and by extension uncritical of those who happen to settle upon him as the author they are searching for to bring them to life.
Over the course of many years he has published, and self-published, poetry, articles, stories, novels and memoirs. He also write screenplays and has made a number of low-budget film productions. His most recent novels were a trilogy of self-contained works dealing principally with the themes of healing and reconciliation. Wanting to advance upon that he is now at work on a trilogy of self-contained novels with the unifying theme of 'new life.'