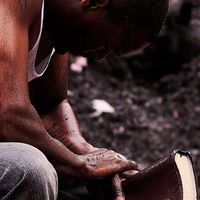 Born March 15 1984 Newport News Virginia native James Elvin Hilton Braxton II would hear the words “you will be sleeping on a park bench when you grow up, and I hope I’m around to see it” from his 10th grade algebra teacher. Although that may not be the best way to motivate a child, troubled by anger and self-doubt James displayed the type of behavior that was consistent with such remarks. From that point James’s life is that of a survivor against all odds but more importantly a man that found his way through pain, triumph and faith. After being arrested in 2005 for attempted robbery among other chargers, surviving a suicide attempt in 2003 to later be diagnosed with manic depression, feeling the pressure of becoming a new father and having no idea where to start, James overcame these odds with the help of mentors, family, and most importantly God’s provision and mercy. He now serves his community as a mentor, speaker and advocate to at risk youth, mental health counselor, former Unit Director of the Lincoln Park Boys & Girls Club, and owner of media Production Company SoulStrong Productions. It is James’s mission to be an inspiration to young men across the nation that share the same struggles he has and encourage them to search for the greatness within them.