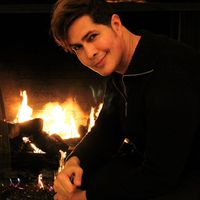 Fabian, a Puerto Rican Bronx native and avid runner from all things permanent, won his first writing award at the tender age of 10 for a short play on fire prevention featuring vampires. He grew up as a pop culture aficionado and a 1980’s band singer while cultivating his ambition to work as a creative artist. Fabian graduated from the University of Hard Knocks with a minor in Potty Mouth studies.

With his effervescent zeal for human expression, Fabian honed his skills in photography, film making and writing that propelled his work to be viewed on The Voice, The Huffington Post and additional international media. His 2011 documentary The Baby Daddy Project has screened at film festivals including BLIFF at Harvard University and The Omaha Film Festival. Fabian’s 2014 cyber age storybook video, The Story of Indigo, has been viewed online in over 109 countries. He currently resides in Nebraska, helping raise his Muppet Baby, fine-tuning his next creative work and continuing with his Superhero obsession. Fabian’s path on his spiritual awakening evolution has expanded into a dream to be an advocate for those who are on their own spiritual path.