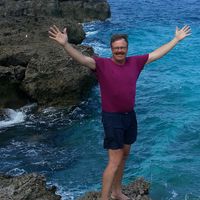 Rex is English, but was born in Java, Indonesia and has spent many years in the Far East. He speaks Indonesian and Malay, sadly he has forgotten his Javanese, Dutch, Thai, Hokkien and Teow Chu.
He has had an interesting life - as a youngster worked his passage on a container ship to Australia where he worked as a cowboy, goldminer, salesman and fruitpicker, before switching from Zoology to the Army to study at Sandhurst.
He saw active service in Northern Ireland and later worked for MI6 as a Soviet double agent. A country manager for an International tobacco trader at 25, he worked as a business consultant in Indonesia before returning to the UK where he raised his two boys while working in marketing and publishing, with forays into NLP and personal development. Now they are adult, he has moved back to the Far East where he travels, writes and researches, interspersed with guiding game fishermen after the magical fish of the Andaman Ocean.
He has always had a passion for writing and this was rekindled by telling stories to his sons.
His hobbies are angling, reptiles, orchids, reading and hockey, though he fears that in his late 50's he is now a little old to keep playing the latter.
His wide experience and knowledge are interwoven into the tapestry of his writing.

In Search of Spice

Culture clash abounds as the people of Harrhein explore the East, traders searching for opportunity and unaware they have Crown Princess Asmara aboard, disguised as a sailor to avoid assassination ...