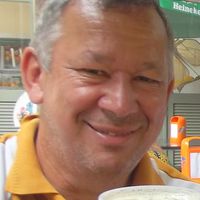 Author, Entrepreneur, Cultural Producer and editor of the Journal of Capital Springs Alfredo Wagner Santa Catarina.
Author of "Learning with the bees how to live in Society" published by Artpress, São Paulo, in 1995.
Born in 1957 in São José dos Campos, where did the primary and secondary education, and, finally, he graduated as a Designer Technical Architecture. After a year of internship in the United States, he returned to Brazil, and starting 1987, living on a farm in the municipality of Amparo, became a beekeeper. He began to create bees without commercial purposes, as mere hobby, for the sake of activity. Made even point of never sell honey production of my hives, but distribute it to friends and needy people. When creating bees, was not limited to a routine without initiative. On the contrary, went far beyond. Driven by curiosity and methodical and resourceful spirit, penetrated deep into the wonderful world of bees. Observed, researched, discovered new utécnicas. Inventor of a bee venom extraction system (bee venom), discovered a formula for purification and armazenação of bee venom without refrigeration. Studied and developed a special wood hive for bees jataí (Brazilian native, stingless), and made unprecedented experiments on the effects of tranquilizers Gregorian chant in swarms of angry and aggressive African bees. Succeeded in 1990 with one of my hives, hit a production record, which caught the attention of experts and publications object was in the press. Passionate about beekeeping. went to work in the dissemination of such material, publishing articles in newspapers, making exhibitions and informal lectures, especially for young people. Experience in these lectures were born several studies. One is "Learning from the bees to live in society", published by Editora Artpress of St. Paul. In the book, presents one of the sweetest bee products: a life lesson. Dedication, love the hierarchy, family togetherness, etc. currently forgotten values, but are reminded, illustrating the life of bees. Currently living in Santa Catarina, developed several cultural projects, including the Santa Catarina Meeting of Writers Alfredo Wagner and Region, held in 2006, 2010, 2011 and 2012 whose story is told in the site htttp: //encontrodeescritores.com.br
It is one of the founders of the Academy of Letters of Brazil / municipal SC Alfredo Wagner and Journal Alfredo Wagner.
Received some honorary titles: In 2012: Knight Commander in the Sovereign Order of the Golden Eagle Kastoria; Knight Commander of Justice in the Sovereign Order Equestrian Prince of Peace; Honorary Doctor of History by the Historical Studies Center of Kastoria. 2011: Doctor of Philosophy Universica, Ph.I. Philosopher Immortal Honoris Causa by the Academy of Letters of Brazil.