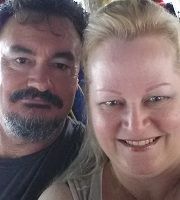 Janet Needham is in her early 50’s and married to her best friend, Bill. Janet and Bill love to travel and explore. They have climbed and/or rode to the top of mountains from California, their home state, to Switzerland. They live in the southern end of the San Joaquin Valley surrounded on three sides by beautiful mountains. Janet and Bill have a Soft Tail Deuce and enjoy riding as the valley they live in is central to many interesting places.

When at home Janet is usually reading or working on one of her many creative projects. If you’re anything like Janet you have ideas all the time. Maybe your ideas come to you in the shower, while driving somewhere, while reading a book, or during some other activity. For many of us, it’s not coming up with an idea that’s the hard part, it’s what the heck to do next. Janet loves creating things and almost always has a project or two in the works from clay to drawing or painting to jewelry and sewing. Janet also has worked in advertising, website designing and app development. Janet has her own App Development company called BakersfieldBizApp. As part of her creative nature she loves to write stories, she is always creating stories in her mind and she has a strong desire to write them, to accomplish something that will last many life-times. This is her passion.

Janet's favorite saying is “If you want to walk on water, you have to get out of the boat”.

Janet's personal mission statement is:
I believe success comes from within.
I will grow stronger with each accomplishment, and even stronger with each setback.
I will give thanks in some measurable way each day.
I will laugh every day.
I will live in awe of my good fortune in life.
I will be humble and serve others.
I will live, play and work with renewed spirit.
I believe everything happens for a reason, and there is no better place to be than right here, right now.

The Sons of Russia are planning an occupation near Feather River where Goldie is on vacation and she gets entangled in the events.