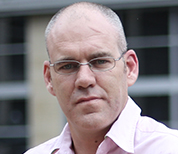 Brian Mawdsley is a Social Media specialist, with over 108 000 followers on Twitter he has established himself as a leader in this industry.

Brian has been in IT and the Internet Services Provider industry from the very early days of the internet (1996) and currently manages a Social Media Marketing and training company called InsideMan. InsideMan manages Facebook, Twitter, Pinterest, Instagram, LinkedIN and Google+ for a number of individuals, Small and big business some of which have branches in 80 countries around the world. Brian routinely trains professionals in the art of managing LinkedIN examples of these professionals are the sales team for IP-Global. For all of 2014 Brian gave back to the Entrepreneur community by offering Twitter training on a monthly basis for free.

InsideMan was then invited to tweet for the international event CrimeStoppers that was attended by the head of Interpol, and many ministers, top ranking officials int eh South African government as well as Desmond Tutu

Brian has started InsideMan 13 months ago and has grown to a team of 6 staff with an eye on doubling that in the next 4 months.

Brian can be heard on a number of radio stations as he is the business mentor on SA-FM once a month, The inspiration Entrepreneur on Cliff central every second Monday.

Recently Brian has been selected to appear on channel 190 on DSTV on TV show called Earned, that showcases successful Entrepreneur sand their business.