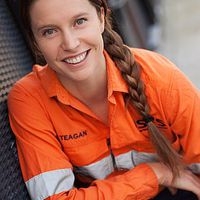 Teagan Dowler is the founder of The BCW. Teagan has significant large scale Civil Construction, Iron Ore, Coal and Financial industry experience in the areas of Human Resource, Learning and Development and Human Behaviour Coaching and Psychology. She holds a Masters of Human Resource Management and a Bachelor of Science (Psychology) from The University of Melbourne.

Teagan is a leader in the area of diversity, inclusion and leadership and is regularly asked to comment on industry developments. Teagan has delivered services to a range of organisations including (but not limited to), BHP Billiton Iron Ore, Glencore, Aurecon, Hyder Consulting, Thiess, HostPlus Superannuation, NAWIC
Victoria, Australian Institute of Project Managers, Engineers Australia and IEEE Women in Engineering. She has been quoted in The Australian House of Representatives, featured in a range of magazines (including OK! Magazine, The
Collective, CLEO) and interviewed on live breakfast radio for 4BC Brisbane. In 2014, The BCW was awarded Top Instagram Accounts to Follow by Mining Global along with a finalist nomination in the Women in Industry Social Leader 2015 Awards.