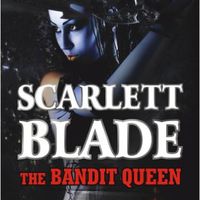 Stacey Welsh wrote her first story in her sleep, well, actually she dreamed it up in one night and then was so compelled to get the story out that she went and blew $500 bucks on a netbook so she could get her first novel “Scarlett Blade: The Bandit Queen” out to the world.

Though her first book hasn’t reached the acclaim that many famous authors have achieved, Stacey continued on. Publishing three more e-books before she started u a free science fiction, fantasy and horror magazine called “Far Horizons.” It started in April 2014 and has been going on strong since. The aim of Far Horizons is to provide a launching place for new authors and artists, to showcase their work and get them a little bit of experience in the publishing industry. Alongside the monthly e-magazine, Far Horizons also produces several anthologies.

In sci fi author Stacey Welsh's first book “The Angels of Abaddon” of her new series “Future's Fight”, it's clear the future is not very bright at all. In fact, it is quite the dystopian science fiction horror. The future of this science fiction genre series is a post-apocalyptic world that is split between the wealthy and privileged who live in relative safety and comfort in the upper levels of an underground city, while the poor and unconnected are forced to try to survive in the crime invested underbelly.

“I'm beyond passionate about 'Future's Fight' and have put a huge amount of thought and work into developing the world it takes place in,” commented Welsh about her new series. “Our hopes are to see the books bring in a large amount of engaged fans so we can not only enjoy seeing the story develop together, but one day even see it brought to the screen. 'Future's Fight' is very visual fast-paced adventure that could come to life on many different platforms.”

Early feedback from users has been passionate – including it being called one of the “best new sci fi books of 2015”.

If you enjoyed Divergent or Wool, enjoy Future's Fight. "What some call terrorists... others call Hope" Don't Miss It! #FuturesFight