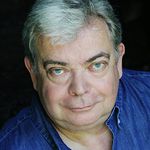 Andy Greenhalgh came second in the Actors' Equity Poker tournament and is not bitter. He is now the only university lecturer to appear as the Desk Sergeant in Eastenders

Andy Greenhalgh studied English at Cambridge and performed with the Footlights. He has worked as a
professional actor for 35 years. In the 1980s he was a stand-up comic.

Onstage he
has played Shakespearean roles everywhere from California to Beijing. He has appeared in movies with stars such as Richard Harris, Patrick Stewart and Chris Walken.

Andy also teaches in a University and is a freelance coach in Public Speaking and Interview Skills.

Andy has written stand-up comedy material and a stage play based on his childhood diaries. SPENCER'S RISK is his first novel.

Preorder 1 book:
And as a HUGE thank you, you'll get:

Preorder 2 books,
and you'll get:

• First run signed copies
• Free Ebook (PDF, ePUB, MOBI)
• Your name Acknowledged in the book
• VIP Invitation to the book launch party to be held in London on publication.

Preorder 5 copies,
and you'll get:

Preorder 10 copies,
and you'll get:

I am delighted to let you know that I have now gained 100 pre-orders, bringing me a significant step closer to publication. Many thanks to you all.