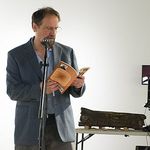 Jon Wesick hosts Southern California’s best ice cream parlor poetry reading and is a regional editor of the San Diego Poetry Annual. He’s published hundreds of poems and stories in journals such as the Atlanta Review, Berkeley Fiction Review, Metal Scratches, Pearl, Slipstream, Space and Time, Tales of the Talisman, and Zahir. The editors of Knot Magazine nominated his story “The Visitor” for a Pushcart Prize. His poem “Meditation Instruction” won the Editor’s Choice Award in the 2016 Spirit First Contest. Another poem “Bread and Circuses” won second place in the 2007 African American Writers and Artists Contest. Jon is the author of the poetry collection Words of Power, Dances of Freedom as well as several novels.

Jon Wesick’s face appears in photographs from physics labs, martial arts dojos, Zen centers, and cities all over the world. He earned his Ph.D. at the University of Maryland and has worked doing cyclotron experiments, communications, medical physics, and systems engineering. He’s studied aiki ju jutsu, aikido, karate, judo, and a little kendo. Martial arts and a fascination with the mind led him to meditation. He lived in Vancouver, Canada for three years during his postdoc and has traveled to five continents so far.

Jon hosts Southern California’s best ice cream parlor poetry reading and is a regional editor of the San Diego Poetry Annual. He hopes that he’s passed on some of what he’s learned from his pursuits in the hundreds of poems and stories he’s published in journals such as the Atlanta Review, Berkeley Fiction Review, Metal Scratches, Pearl, Slipstream, Space and Time, Tales of the Talisman, and Zahir. The editors of Knot Magazine nominated his story “The Visitor” for a Pushcart Prize. His poem “Meditation Instruction” won the Editor’s Choice Award in the 2016 Spirit First Contest. Another poem “Bread and Circuses” won second place in the 2007 African American Writers and Artists Contest. Jon is the author of the poetry collection Words of Power, Dances of Freedom as well as several novels.

3copies
0 250 500 1000
Success! The Alchemist's Grandson Changes His Name has already sold 3 pre-orders , was pitched to 19 publishers , and will be published by Gnome on Pig Productions .

Signed copies of my story collection "The Alchemist's Grandson Changes His Name" and my YA novel "Yellow Lines." 1 copy of each

Signed copies of my story collection "The Alchemist's Grandson Changes His Name" and my cyberpunk novel "A Butterfly for Zhuangzi." 1 copy of each.

25 signed copies of my story collection "The Alchemist's Grandson Changes His Name," my cyberpunk novel "A Butterfly for Zhuangzi," my graduate school parody "The Department," and my YA novel "Yellow Lines." 1 copy of each

The Alchemist's Grandson Changes His Name

Salsa music changing the life of a weapons scientist, a 9-11 victim navigating the Bardo realm of the Tibetan Book of the Dead, and a couple of accident investigators consummating their affair only when there is an airplane crash are the premises for some of these short stories.

Jack McNally of the Federal Aviation Administration consummates his affair with Grace from the National Transportation Safety Board only when they meet to investigate plane crashes.

Steve Rideout wants to have sex one last time before prostate surgery leaves him impotent but Johanna won’t cooperate.

The Alchemist’s Grandson Changes His Name

A stolen, Hindu statue gives an addict a second chance after he steals from a Cambodia gangster.

Chet Blackwell is about to test for his aikido black belt when he makes an unfortunate slip of the tongue.

The Storehouse of Consciousness

A description of the library that holds all the lost and unwritten books.

Art Franklin spends his life savings on a suborbital trip into space.

When the Live Sex Show Came to Grover’s Corners

A stranger comes to Farley’s Gulch and offers a twenty-dollar gold piece to anyone who will let him stay in their home. But when he leaves, the host dies. Is it black magic? Only young Jake can find out.

El Presidente logs and mines the jungle when hunters do not bring back the jaguar pelt he desires. The jaguar has other ideas.

Faster Than the Speed of Love

Wendy Richards is about to commit suicide when the ghosts of Allen Ginsberg and William Carlos Williams send her an inspiration.

After Stuart breaks up with Marina, she calls him to help an injured crow.

Crane inadvertently helps a sorceress take control of a group of zombies. To rescue his kidnapped girlfriend, he follows the sorceress to Colombia where she has a score to settle with narco guerillas.

What happens if your head is a funnel and you must feel any garbage people throw in?

Wounded by a fatal arrow, Kinnar hallucinates while waiting to die until a goddess intervenes.

Royce goes on a date with a strange woman the day before his mixed martial arts match.

After a failed drug heist, McCheese gets a job and a shady organization that guarantees security for criminal deals.

A 911 victim tries to understand what happened to him in the Bardo realm of the Tibetan Book of the Dead.

The Problem Has Always Been People

To survive a plague, a man must put up with racist mentors.

An investigator tracks a member of a research team to the Hopi reservation to find out why the others committed suicide or went insane.

Deputy Norm Sleater must contend with interspecies cultural and sexual differences when he investigates the murder of a Neanderthal girl.

Two activists smuggle a suitcase that may contain a bomb on an airliner.

Unable to obtain the Substance D he needs to get back to his own time, Jack Danger plots the assassination of Soviet Ambassador Molotov. To intercept the airplane, Danger will need use the wings that can barely lift him off the ground.

Bank robbers get more than they bargained for when their hostages include a CIA assassin Springer Wellman.

I expect writers and graduates of creative writing programs to be most interested in my short story collection although I’ve tried to make the stories accessible. In my experience, writers contain an even balance between men and women. Although most of my peers are over 40, I’ve gotten good responses from millennials.

I’ve featured in San Diego, Orange County, Los Angeles, and Edinburgh. I even placed in a poetry slam in Sydney, Australia. My poems and stories have appeared not only in America but internationally, as well.

My self-published novels have had mixed success. Aionios Books just released a science fiction novel of mine. With its more professional cover and layout, I expect improved sales. Short story collections may not sell as well as novels but they do sell. For a collection from a small publisher, sales of 500 to 2500 can be expected.

Stories of Your Life and Others, Ted Chiang, Tor, 2002 - collection of innovative SF. My collection includes more real-life stories.

I boarded the Star Ferry at Kowloon and sat up front, where I could admire Hong Kong’s modern skyline and the freighters flying Chinese flags in the aquamarine water of the bay. When we docked at the Central terminal, I flowed down the gangway with the crowd. I walked west on Des Voeux Road to Sheung Wan, climbed the hill, and scouted antique shops until I found one that looked upscale.
A tone chimed when I entered. I wandered among the gold Kuan Yins, huge stone Buddhas, and Kwan Tis with their beards and halberds.
“May I help you?” a Chinese woman with a few strands of gray in her hair asked. Her tasteful clothes and the reading glasses propped on her head gave her an air of wealth and scholarship.
I slipped the rucksack from my shoulders and looked at its worn canvas exterior. The statue inside would bring enough money to keep me in heroin for the rest of my life. I turned the rucksack over in my hands and thought of the horrible deaths of Thay and his henchmen.
“No,” I said. “I’m just looking.”
Some forces are too powerful to provoke. A library would have the address of the Phnom Penh Antiquities Museum, and there was a post office not far from my hotel. I had enough heroin to last a few days, enough for me to hook up with Three Fingers Wang. He was always looking for talent.