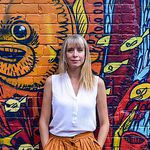 Andreah Barker is an award winning author, ghostwriter, book coach and solo kitchen dancer. Within the last year she has completed 10 books.

Andreah Barker is an award winning author, ghostwriter, book coach and solo kitchen dancer. Within the last year she has completed 10 books, 2 of which were for children and 8 of which were full length non-fiction for adults.

Andreah began her writing journey at a very young age, but began taking it seriously with her Master’s Thesis on the history and practice of dance/movement therapy in Canada, which was based on her own research working with the older adult population.

A lover of all things creative, Andreah has been developing Lacey Luna’s magical universe for the past year. This began with a children’s book called One Red Bird, which successfully completed a Kickstarter campaign at the end of 2020. She continues to develop the story with another children’s book called Lacey Luna & the Fiery Flutterby and the middle grade sci-fi/fantasy series, Lacey Luna’s Universe. Andreah is aiming to have the first book in the series of three, The Cave of Whispers, completed by the end of 2021.

2 signed copies of The Cave of Whispers
1 5x7 flower print.

$100 The Never-Ending Tower of Pancakes

The Cave of Whispers

Book 1 of the Lacey Luna Series

The Cave of Whispers is the first book in the Lacey Luna Series. It is a sci-fi/fantasy fiction about a 15 year old girl who finds herself in the midst of a battle only she, along with the help of some magical friends, can win. Lacey is a young girl with incredible power and an ability to inspire.

Embed The Cave of Whispers

Over 200 years ago a war to save this universe was won. The victors have kept us safe for centuries, until now. The threat is back because of one girl and her incredible powers. She is both the reason they are here, and the only one who can save us.

As Lacey Luna navigates her new reality and the weight of her responsibilities, she inevitably learns that she must accept all of herself in order to succeed. For her this means she can’t always be the nice girl that everyone likes. There is a fire deep within that she must embrace; the fate of this universe depends on it.

Lacey’s story addresses the subjects of emotional intelligence, bullying, mental health, acceptance, empathy, and magic in ways that not only engage the young reader but ask them to think more deeply about their own lives. Her character displays strength, determination, and an ability to adapt to some of the most unexpected situations. Children (and maybe even some adults) who love to be drawn into magical adventures will love being immersed in Lacey’s world of wonder.

The story begins when Lacey wakes up one morning to find her room was being filled with a raging river of her tears. She was so tired of hiding what was happening to her.

Her magical parents, who had survived the war of the universes, didn’t believe this world was ready to see the kind of magic that existed within it. So they kept their magic a secret from everyone including their children. Although Lacey had hid her magic from them, they knew. They thought it was best to raise her to be as normal as possible. They knew how hard it was to have something amazing and not be able to use it. Was it a mistake? It might have been. But once it was done it was done.

Although Elliot hated everything about sending his daughter to Aunt Aida, there was nothing he could do. Even if he and Molly shared their secret with their children they knew enough to know that Lacey’s power was something beyond anything they had ever seen. She needed Aida.

Unfortunately Lacey doesn't have long at Aunt Aida’s before she is found. Her river of tears was a high enough level of magic to send out the beacon. They heard. They are always listening. Lacey’s power is sought after by those who were banished after the first war, 200 years ago. The school is attacked leaving Aunt Aida injured and the children vulnerable.

There is only one thing to do and that is get Lacey ready for battle. She, along with the others, are the only thing that can save our universe from being taken down by those who have a different idea of what the finer things in life are… meaning the end to life as we know it.

Mama Blue, along with the help of Ms. Aida, folds the land and sends the group to the 2nd and final safe house they have set up. It is here that they all come together to help Lacey develop her skills and take control of her magic.

While they are able to spend some time tucked away within the BC mountains, they know they are being hunted. Diego knows more than anyone else that they don’t have as long as they may think. It is in the Cave of Whispers where they all learn about their own individual strengths and weaknesses. It is here where they fight their first battle. This is the first book of a three part series.

Lacey
Defining feature - heterochromia
Lacey loves people. Her inability to control her magic over the past few years has made her feel isolated but once she feels accepted she really opens up. Lacey is very empathetic. When someone is hurting she does everything she can to help them feel better. One of the lessons she learns throughout this journey is that she can’t save everyone. The second is a big one: she must recognize and embrace some of the darker sides of herself to succeed.

Freya (The Fiery Flutterby)
She has lived in this universe for only 82 years, but looks 15. Her preferred form is a butterfly with glowing blue flames for wings, although she does have the ability to blend herself into any background when in this form. She makes herself human only when she needs to. It has been a long time since she escaped her captors.

Tate
His mother is Jamaican and his father is Irish. They met in Canada after they both moved to Hamilton ON for university. They had something in common that drew them together: magic. Tate was sent to live with Ms. Aida at the age of 13. His magic had become bigger than anything they had ever seen in their lifetimes and they could no longer help him foster it.

Emory was born into an incredibly wealthy family in Hangzhou, in the Zhejiang Provence of China, where she was rised. As her powers developed she used them to defy her controlling parents, causing friction in the family, especially with her mother. 2 years after she was sent to Ms. Aida in Canada her mother died tragically in a car accident. Her father was devastated and moved out of the family mansion, leaving it empty and available for a great first safe home.

Diego
He is the youngest of 3 and has been raised by his single father. Being the youngest of the group of teens he can seem to be fearful at times, but there is also a side to him that is very wise. He sees and knows things others don’t, and is very mature in how he takes in and handles the information that at times can be scary. Then there is the creative side to him that loves graphic novels and super heroes.

Wren
Wren knew from a very young age that he was meant for bigger things. And so he sought them out. When he first developed the ability to fly, he was the one (not his parents) to seek out Ms. Aida. He knew there must be more out there and he wanted as much magic in his life as possible.

Liv
Raised in Montreal, Quebec. Liv is the oldest of 6. She’s very mothering and practical, due to her having to grow up at a very young age. Before moving to Ms. Aida’s she helped to take care of her siblings. Her mother felt the loss when she left, but she knew she had to do right by her daughter and so she let her go. Liv missed her family and often travelled back in the summers to visit them.

Tessa
Adopted as a baby, Tessa had never met her original parents. She had no desire to either. She was raised by her single Mom and older brother after their father passed. She had always felt grateful to her Mom for all that she had sacrificed for both she and her brother.

Tessa was originally born in Vancouver but she and her family moved to Calgary so that her Mom had the support of her family after her husband died. Tessa was especially close with her grandfather.

Tessa only shared her powers with her family after Ms. Aida approached her. Ms. Aida saw immense value in what she had to offer this universe and offered to help her develop her magic.

Young girls and boys between the ages of 8 and 12.