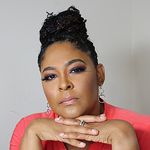 Owner of content agency, Word Stylist, Nakita has always been obsessed with the anatomy of story telling and connecting with others through words.

Words have been my thing since middle school. I started writing short stories when I was 13. I guess it was then that I realized that writing was a natural gift. I went on to work for my middle school paper and worked my way into the position chief editor of the yearbook by my senior year of high school. Known for my socially charged personality, being a writer seemed a bit of an oxymoron.

At heart, I’ve always been a creative writer, so when I started Word Stylist in 2014, I saw an opportunity to create my own lane in the writing world. With the growing need to create meaningful content in a digital world, the emergence of content marketing has afforded me to share my gifts with the small business community. I like to think of myself as a perfect blend of a journalist and a creative writer, building a compelling story while telling the facts.

Writing my first book, The Decision, allowed me to start sharing my own stories with the world in a fun, engaging way.

1 autographed copy of The Decision + free invitation to book launch. You will also be invited to join my Facebook community where you can follow to receive exclusive updates and prizes.

2 autographed copies of The Decision + free invitation to book launch. Plus, join the Facebook community where you can receive exclusive updates and prizes. Lastly, you receive an invitation to a 4-week virtual book club led by the author.

10 autographed copies of The Decision + free invitation to book launch. Join the Facebook community where you will receive exclusive updates and prizes. Attend a 4-week virtual book launch led by the author. Last but not least, free enrollment in the author's year-long Find Your Muse program where you will learn step by step how to write your own book.

25 autographed copies of The Decision + free invitation to book launch. Join the Facebook community where you will receive exclusive updates and prizes. Attend a 4-week virtual book launch led by the author. Free enrollment in author's year long Find Your Muse program where you will learn step by step how to write your own book. Two exclusive one-on-one 1-hour coaching sessions with the author to write the book of your dreams.

Seeking to find real purpose in her work, Talia is faced with a life changing opportunity, but is that what she really wants? Journey with her as she faces life changing decisions that will not only impact her life but those around her.

Like the game of dominos, each decision you make has an impact, a ripple effect. Life is a series of choices and sometimes those choices involve risks. No risk, no reward, right?

Talia feels like she has made it in her life. She has a great boyfriend, a great job and now an incredible opportunity to level up at work. The only problem is, she doesn’t feel fulfilled and she doesn’t know why. Talia has to discover what moves her heart as well as her mind, but in her journey, she learns that each step, each decision that she takes will impact other relationships in her life. Should she fulfill the status quo and live with this empty feeling or should she take a chance, take a risk and find true happiness?

The Decision allows you to take calculated risks as the reader by literally putting YOU in the driver seat of the main character, Talia. If you've ever been on the fence about pursuing your dreams or maintaining the status quo, this is the book for you.

Talia Cooper (main character): Strong-willed single mom. From a small town, she moved to Atlanta to seek a better life for her and her daughter. She went to school, started from the bottom and built a strong career and income to support her and her daughter. She is proud of her accomplishments but feel like something is missing in her life and seeks to find out what that is.

Zack (ex-boyfriend): Zack is Jasmine’s dad and Talia’s ex. Though he is her ex, they parted on amicable terms. Zack didn’t want to go with Talia to Atlanta because he is a good old country boy, dedicated to his life at home and obligated to care for his aging parents. He respected Talia’s decision to move and make a better life for herself and her daughter, but he chose to stay behind. Talia’s high school sweetheart, Zack understands Talia more than most and continues to be a great friend and confidante as she struggles with life changes. He’s also supportive of her relationship with Tony.

Jasmine (Talia & Zack’s daughter): An old soul, Jasmine is only 9 years old but senses the changes her mother is going through. She only wants her mother to be happy. She loves her daddy but welcomes Tony into their life and can see the existence of both.

Tony (Talia’s boyfriend): Tony is an architect and a great boyfriend for Talia. He loves Jasmine and Jasmine loves him. He looks at things in black and white. He’s very practical. For him, it’s okay to sacrifice a bit of your happiness for security and the greater good. This becomes a point of contention between him and Talia when she thinks about pursuing a dream with a bit of a blurry outcome.

Tim Stevens (Talia’s boss): He is Talia’s boss at the advertising agency. For the most part, he’s a pretty good guy, as long as he gets what he wants. He wants Talia for a special role in the company, but she is uncertain if she wants to pursue it because it may result in her compromising her newly discovered dream. She soon discovers how different Tim’s demeanor is if she says no.

Allison (Talia’s best friend): Allison is the best friend that took Talia in when she decided to move to Atlanta to start a new life with Jasmine. She let her bunk on her couch with a baby while she worked to go to school and build her new life. She also introduced her to the ad agency where she now works after she received her degree. Allison is humble enough to even accept Talia as her new boss when she is promoted to creative director. She is the constant in Talia’s life, supporting her decision, no matter what it is to move forward with her dream. She helps her and gives her hope when things aren’t going as well as she hoped.

Chapter 1: The offer
Talia receives a once in a lifetime offer at her job. Her hope is that this would fill the empty place in her life, but she doesn’t feel overly excited about the opportunity. She’s torn because she doesn’t know what she is being drawn to, but she’s not 100% sure this opportunity is it. As she considers her options with people in her life like Tony, the decision becomes more complicated as others weigh in with their opinion on her life.

Chapter 2: Weighing options
Talia needs to clear the noise in her life and decides to weigh the pros and cons of this opportunity to see if it’s worth pursuing. As she does this, she discovers a hidden dream she’s almost forgotten about.

Chapter 3: New discovery
Talia rediscovers her love of fashion and her once dream of owning a fashion boutique. She reflects back on a project she did in high school where she opened her own boutique. The thought of pursuing this dream makes her feel alive again, but is it worth it to pursue a dream full of unknowns when she has a sure thing right in front of her?

Chapter 4: Running out of time
Tim has only given Talia 2 weeks to make a decision and she is starting to run out of time. She is feeling the pressure as Tony is urging her to accept the offer, but she has not discovered a hidden dream that may be the answer to emptiness she was feeling.

Chapter 5: Road less traveled
Talia has run out of town and has to make a choice. Will she take the offer at her job or will she attempt to pursue her dream and start a boutique?

Chapter 6: Second chance
While Talia is trying to decide what to do in her career, Tony proposes. She loves him but there seems to be a cause and effect between him and her choice to take Tim’s offer or pursue her dream to open her boutique. Tony is having a hard time understanding anything that is not tangible, and her dream is not tangible to him. She also has the chance to pursue the offer with Tim with the opportunity to pursue her dream in a few years with his support, but she fears that she might be going into a rabbit hole if she opts for this.

Chapter 7: Take the plunge
Talia has to choose whether or not to go headfirst into her dream and accept the consequences or trust her boss to be good on his word and hope for the chance to achieve the best of both worlds.

Chapter 8: The cost
There is a cost to every decision made, both in the professional and personal world. Talia learns that her decisions are impacting more than herself and will have to choose whether or not Tony is the right man for her. In the meantime, her friendship with Zack continues to grow as he supports her dream. He is also finally planning to move into the area to be closer to Jasmine

Chapter 9: Business plan
Talia learns that the path to starting her business will not come easy as she works to build a plan and seeks bank funding. Will she quit with every sign of adversity? Does she feel regret at leaving her job behind?

Chapter 10: Grovel or hold your head high
Talia has one last back door open with her job. When things get tough, will she give in and go back or tough it out? On that same note, will she try things again with Tony or will she walk away from their relationship? Zack is moving into the area and Talia has offered him the chance to stay at her place while he gets settled. It’s also financially helpful to her should she opt not to go back to work. There’s also a romantic cause and effect to her decisions and who she will end up with based on her career choice.

Women age 18-45 It connects with the problem of going after your dreams and the resulting cause and effect.