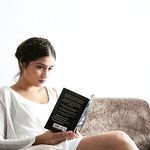 Fabi Ghittoni is an Argentina-based attorney and writer.

The Elven Tales is her debut novel, and the first of a five-book series for kids, young adults, and fantasy readers.

Fabi Ghittoni is an Argentina-based attorney and writer. Since childhood she experienced love for literature and fiction (Greek mythology being her first catch). She is also an avid reader and bookstagrammer. She graduated from law school at the very young age of twenty two. After obtaining her degree she decided to pursue a writing career. The Elven Tales is her debut novel, and the first of a five book series for kids, young adults and fantasy readers.

By pledging $10 you get an eBook copy of The Elven Tales for Kindle.

By pledging $20 you get an eBook copy and Paperback copy of The Elven Tales.

By pledging $35 you get a signed paperback copy of The Elven Tales.

By pledging $100 you get signed paperback copies of The Elven Tales, a customized stationery package, and two invitations to The Elven Tales book launch in London, UK.

By pledging $150 you get signed paperback copies of The Elven Tales, a customized stationery package, two invitations to The Elven Tales book launch in London, UK and an online/offline hangout with me, the author.

The Company of the Rose

Prudence lives a normal life until a brutal attack catapults her into a new reality – one where she's the most important refugee of the Council of the Five Kingdoms.

Prudence Clark lives a seemingly normal life in Cambridge with her best friend’s family. But a series of strange events compounded by a wave of kidnappings is about to turn everything she believed about her existence upside down.

A brutal attack catapults her into a new reality – one that makes her the most important refugee of the Council of the Five Kingdoms. Now, she’s charged with the task of finding the King’s runes to stop Alanel, the most malicious and ruthless being, following his escape from prison.

Alanel has declared war on the king of Arkana. Now, even more shocking truths come forth, exposing long-held secrets about Prudence’s past and her destiny. Her newfound knowledge will prompt her to embark on a treacherous journey to face dangerous beasts in the most inhospitable of places. But her journey will not be alone, she’ll be joined by the Company of the Rose, brave warriors that will fight by her side, and hopefully, lead to the retrieval of the runes before it’s too late.

Support The Elven Tales by preordering! Your contribution is essential to make The Elven Tales a reality. And for only $20 you get a beautiful paperback copy to treasure on your bookshelf!

Prudence Clarke lives a completely normal life in Cambridge with her best friend’s family. Maddie, Doreen, Bram and Carter had taken her as part of their family. But strange events start to occur all over the country and seventeen year old kids are mysteriously vanishing.

On her way home, the night of Maddie’s birthday, Prudence buys a gift for her, a precious embellished pendant. She gets assaulted and she is attacked by two strange individuals as she pasts out.

Prudence wakes up in a very different world, a world where she is the most important refugee of the Council of the Five Kingdoms. She starts to discover this new world and soon she realizes how little she knows about who she really is.

Prudence is taken to witness a conclave where she meets the authorities of the Council of the Five Kingdoms. Also in this chapter she meets the members of the Company of the Rose. Finally, her true identity is revealed to her. She is the daughter of King Tareos, the Elvenking.

Prudence gets back to the human world, and visits her grandparents in search for answers. A letter from her mother is handed to her. Back in Borghild, she begins her training in order to embark on a dangerous journey.

Prudence gets her powers tested under the Oracle at a little village called Fort Are, and it is revealed that she is an Astor, the kind of elf capable of manipulating the four elements of nature, as well as light. But her powers have been buried in the depths of her being, using ancient elven magic and will be very difficult to get them back. A sudden attack of the dark legions falls over Fort Are before her powers can be released.

In order to decipher her mother's letter, Prudence embarks on a journey joined by the Company of the Rose to the Atarum Edges to find an interpreter of an ancient dead language in which the letter is written. The letter contains indications of where to find the first rune.

After being attacked by a group of nymphs in the swamps of the White Forest, the Company of the Rose arrives at Penrith, the first great city in their route.

Once in Penrith, they discover the presence of dark magic in the woods and in the waters of the Mothingale River. They meet Lord Besyyd, who rules the city. He fears for the safety of Penrith and offers them his help to reach the Atarum Edges safely.

Lord Besyyd not only lends them a flock of mighty warring birds called Mithlons. In addition, he perceives the great power latent within Prudence and proposes to help her to free it. For that, he takes her before the presence of a boggart, which through fear, causes deep horrors and fears to emerge from the depths of Prudence being. It also manages to awaken her power of light.

The Company arrives at the Atarum Edges and meets Killian Vardran, the interpreter who reads Prudence's letter, and reveals the location of the first rune. To find it, they must embark on a journey to the dwarven kingdom of Azmarath, by the sea. On their way, they will spend the night at the village of Linmehl and Prudence begins to suspect that there is a traitor within the group.

They sail towards the Gaalean Sea until arriving at the shores of Azmarath. Their ship is confiscated by the guards of King Gurdan and are brought before him. Prudence asks him to explain the meaning of a symbol she remembers seeing on the map. The rune is in a sea cavern, guarded by  a gigantic creature they must face.

They head to the cave that is located in The Shallows, east of Azmarath. There they face a gigantic creature and Prudence passes through its custody to recover the rune, not before her companions suffer a powerful attack. There was something else besides the rune, a map with the location of the second rune.

On their way back to Linmhel and with the rune in their hands, they are ambushed by an enemy ship. The Azarias have found them because their location has been betrayed. A raw battle breaks out on board of the ship and they end up being taken prisoners.

Prudence tries to escape with Genuss, but Alanel, the Dark Lord, and his army of Azarias are ready to invade Arkana. She is taken by Alanel in front of the Elvenking, her father, and he is brutally murdered by Alanel, in front of Prudence and all of his people.

Prudence runs aimlessly into the palace, and she is found by Dedric and Genuss, who have escaped. Together they try to leave Arkana but the kingdom is under siege. The elves find them and take them before the King's Assembly. There, a very great responsibility will be entrusted to Prudence, the heiress of the throne.

Alanel and his army have broken through the walls of Arkana. A terrible battle is unleashed. The elves defend the palace before the enemy invasion, and soon comes the help of the giants, who surround the Azarias and manage to corner them. Prudence and her companions go out to fight alongside the Elvish army, but in a second she stands helpless in the middle of the chaos and becomes the perfect target.

Prudence is rescued just in time by Lord Kotal, who appears suddenly and wearing his appearing cloak, takes her in a heartbeat back to the distant and safe prairies of Borghild. Prudence gets angry because she did not want to leave her friends. She feels that she has let them down. At that moment a piece of paper falls out of her pocket. The map containing the location of the second rune. She must return to Cambridge to get it, and there, the reunion with Maddie, her best friend, will add a new member to the Company. The journey is not over, and neither is the war.

Those who have read books like Harry Potter, the Lord of the Rings, or the Hobbit, know what it is to enjoy a cozy reading. As in these stories, The Elven Tales has a lot of world development, not only in terms of places, but also in terms of fantasy creatures, potions and magic tricks, own terminology, and more.

The Elven Tales will grab your attention from the very early sentences, since it is simple and easy to read for all-ages and for non-native English speakers.

Just to mention an age range: 13 and up young adult readers who like magic and adventure. It can also be enjoyed by adults fantasy readers in general. Fantasy readers who love elves, dwarves, wizards, giants and fairies are specially targeted.

It is a book that you could buy for your young children or teenagers, and you will end up enjoying it yourself with a cup of hot coffee in your reading corner.

The Elven Tales promotion will be done by combining presence in social networks like Instagram and Youtube, through online tours and features in multiple blogs. In addition, email marketing will be used through lists collected throughout the process of developing the book. I have my own website (www.fabighittoni.com) where readers can subscribe to a newsletter to receive news about upcoming releases and special discounts.

Does novels about magic, friendship, and adventure sound good to you? The Elven Tales could be your next magical read among others like:

The Lord of the Rings Series, J.R.R Tolkien

The Chronicles of Narnia, C.S Lewis

The Alchemyst: The Secrets of the Immortal Nicholas Flamel, Michael Scott

The Name of the Wind (Kingkiller Chronicles), Patrick Rothfuss

Why you should read The Elven Tales: The story begins in Cambridge, in the real wolrd, with a normal family and ordinary people. But Prudence Clarke is not like them all. She just needs to find it out. Unexpected events will prompt her to a new world she is destined to rule. But why? Long held secrets will be unveiled along a very dangerous journey. The Elven Tales does not lack of friendship, elven battles, action packed scenes, magic on its full expression, and of course tons of mysteries and armies of bloodthirsty creatures that serves a Dark Lord that must be defeated at all costs.