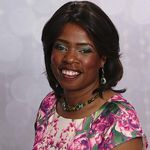 Moriamo Onabanjo was born in Plainfield New Jersey. The entire family moved to Nigeria where she spent the next 30 years. She studied Architecture and became an Associate Professor in the Department of Architecture at Obafemi Awolowo University Ile-Ife. She obtained her Bachelors of Fine Arts in Creative Writing for entertainment from the Full Sail University.
Moriamo Onabanjo’s love for mystery and history has led her to write her first novel. She lives in Las Vegas where she spends time taking pictures of Las Vegas architecture.

Moriamo Onabanjo is passionate about writing Historical Dramas and Architectural History. Born in Plainfield, New Jersey but raised in Nigeria, she obtained her Masters Degree in Architecture at the Obafemi Awolowo University, Ile-Ife, Nigeria where she taught the history of architecture for three years.

Moriamo's return to the United States inspired her to change career paths and pursue her love of writing. She obtained a Bachelor of Fine Arts in Creative Writing for Entertainment at the Full Sail University where she studied a variety of writing mediums and genres. Fueled by her love of research and historical dramas, Moriamo published her first short novel, "Intervention", on Smash-words, her first children's book, "The Land of the Ostrich" on Amazon and “Prince Ekaladerhan,” an article for One Million Stories magazine.

She is busy writing a historical drama based on Zadok, the Jewish high priest, whose life drama unfolds in a two-part saga spanning several decades. Moriamo is also an expert on architecture and writes articles about the unique buildings found in Las Vegas, where she currently resides.

Includes:
1 hardcopy of my book that will be personally autographed by me
Special mention on my social media (Facebook, Twitter and Instagram)
The Ebook will be included.

Includes:
1 hard copy that will be personally autographed by me
5 bookmarks
Special mention on my social media (Facebook, Twitter and Instagram)
The E book will be included.

Includes:
1 paperback copy of my book
1 hard copy that will be personally autographed by me
7 Bookmarks
A special mention in the acknowledgment page
The E book will be included.

Includes:
2 paperback copies of my book
1 hard copies that will be personally autographed by me
9 Bookmarks
A special mention in the acknowledgment page
The E book and PDF will be included.

Includes
2 paperback copies of my book
2 hard copies that will be personally autographed by me
12 Bookmarks
A special mention in the acknowledgment page
The E book and PDF will be included.

Includes:
3 paperback copies of my book
3 hard copies that will be autographed personally by me
15 Bookmarks
A special mention in the acknowledgment page
A Special thanks and a mention in my next book, "The Sons of Zadok"
The E book will be included.

Mystery in the ancient city of Ile-Ife.

An archivist must find the link between a missing manuscript, and a lost relic before an ancient town witnesses a coronation gone wrong.

Synopsis
At the heart of the ancient town of Ile-Ife, in a grotto, is an ancient relic. Its origin is said to date back to the town's inception. Worshiped as a god, the artifact was buried centuries ago on the grounds of the Oba’s (king) palace. The current Oba (King) by his oracle instructs that the relic be exhumed and then he dies. To their surprise they find it missing. A hunt for the missing artifact begins and it’s a race against time, for without it the new Oba cannot be crowned. Similarly in the Obafemi Awolowo University the town’s only college and Africa’s most beautiful campus, a famous manuscript on Yoruba History, missing for a century suddenly appears in its library. What links both events? Renowned archivist Professor Folashade Benson has the onerous task of connecting both events before the ancient town for the first time in its history goes without an Oba (King).

Background
This book is based on my personal experience. I lived in Ile-Ife, most specifically the Obafemi Awolowo University for over thirty years. The ancient town of Ile-Ife, Nigeria is said to be the cradle of the Yoruba civilization. The Yorubas (of which I am one) is one of the three main ethnic groups in Nigeria. They can also be found in the Republic of Benin, the nation next to Nigeria.

Over the years my father describes the story of his great grandmother, an Ile-Ife princess, who escapes slave raiders invading the land of Ile- Ife over a century ago. She flees her homeland and settles in another town far from Ile-Ife. This story has intrigued me for years and I have used this in my book as well as my experience in Ile-Ife.

The renowned Historian Reverend Samuel Johnson wrote a book on Yoruba History in the nineteenth century; however, his manuscript was misplaced while on its way to the publishers. His brother after his death completed the book. The first manuscript till this day cannot be found.

My book revolves around these historical themes to create an interesting story.

Location of the book: The book is located in Ile-Ife, Nigeria, West-Africa

Audience: For Male and Female who love historical fiction.

This book is a religious conspiracy thriller. Those interested in books like these are used to exotic settings  and stories with twists and turns. A book in this sub-genre would pique their interest especially since its based in the African continent. Something that is a rarity.

Print a ton of business cards featuring the book cover, my website and email address.

Create a personal author website where I can sell my books.

Create a Facebook profile of my protagonist, Professor Folashade Benson.

Sell to non retail outlets such as Libraries, book clubs

By the end of the year I want to have sold over five hundred copies of my book.

2. Angels and Demons: An ancient brotherhood known as the Illuminati and the Roman  Vatican,

4. Sphinx: Alexandria, Egypt, 1977. A mysterious ancient device and a dangerous world of conspiracy and Egyptology.

5. The Gaudi Key:  A sacred relic to a prominent member of an order, and a desperate mission.

These books written by famous authors have taken historical facts and created an interesting read. My book has done the same thing with a twist. First of all it is based in Africa where little is known, secondly this is a place I have lived all my life and the history is from personal experience.