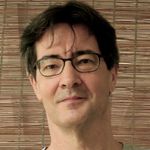 Beyond writing, Marc works as a voice-over talent and can be heard throughout Singapore, Southeast Asia and the US.

Get The Other Side as a beautiful and magical ebook. You will receive immediate access to download the ebook. The Other Side is compatible with iBooks on iPad, iPad mini, iPhone and iPod touch.

Get the hardcover edition of The Other Side, printed on Forest Stewardship Council-certified paper, ready before Christmas! Includes the magical ebook.

Get the signed hardcover, with a personal thank you note. Of course, the ebook is included.

We are truly grateful to our patrons. This edition gets you acknowledgement on a special page at the front of the print edition, as a patron who helped make "The Other Side" possible. Thank you!

Caleb’s imagination has been stolen by sinister creatures known as the Nups. Suddenly, the magic is gone from his life. Will Caleb ever imagine again?

Embed The Other Side

**UPDATE: Thank you for making this campaign a success! If you missed the preorders campaign, you can still get yourself a copy from www.othersidebooks.com

“The Other Side” is a beautifully-illustrated story about a child's quest to retrieve his stolen imagination. The ebook is complete, and we are now launching a preorder campaign for the printed version.

Once we receive $5000 in preorders, we can initiate the print run, and you will receive the printed version shortly thereafter. You will receive access to the ebook straight after the goal is reached.

“The Other Side” will be printed on Forest Stewardship Council-certified paper by the internationally renowned Tien Wah Press in Singapore, and delivered to your door.

Your support for “The Other Side” will not only make the printed version a reality, it will also place you among the first in the world to receive both versions on this delightful tale. We truly appreciate your interest!

The Story Behind "The Other Side"

“The Other Side” was originally conceived as a musical, and I actually wrote several songs for it. As the work progressed, however, I began to realize that it might be even more expressive as an illustrated book.

Thus, I decided to write a few pages, just to see if I was on the right track. When the first eight were complete, I called to my children, Noah and Zoë, who were eight and six at the time. I asked them to listen to these initial pages.

When I finished reading, they said in unison, “Go on.” But that’s all there is, I explained. They were a tad angry. “Well hurry up and write some more,” Noah demanded.

The first hurdle had been passed: if Noah and Zoë liked the story, I knew I was doing something right. Had they not, they would simply have shouted “Boring!” and left the room. I wrote a few more pages, which were met with the same response: “Go on.”

This was followed by more anger and the repeated directive to continue writing. Eventually, I finished “The Other Side,” and, though pleased, Noah and Zoë insist that I write another.

With this kind of support, how could I not?

She was contracted through Scrawl Studios to produce the artwork for “The Other Side.” When I saw her initial sketches, I was very impressed.

When I saw the final illustrations, I was stunned. With no more than a few lines to guide her, she had created – in exquisite detail – the magically colorful world of Caleb and Kingston.

When I asked her how she was able to visualize such a wondrous place, she replied, “The story inspired me.”

I hope you’re as inspired by Syarah’s beautiful illustrations as I am!

He received a Master of Arts in Public Visual Communications and later taught Broadcasting and Speech Communication at Western Illinois University in the US. In 1993, he was appointed Creative Supervisor at Dentsu Inc., in Tokyo, where he was responsible for English-language advertising.

His awards include Gold at the London Advertising Awards, Gold and Silver at the New York Festivals, and Bronze and Finalist Awards at Cannes.

In 1997, Marc arrived in Singapore and worked through his own company, marc my words. He wrote three seasons of Nickelodeon’s Gruff’s Groovebox, a popular animated series for children. In 2001, he ventured into theatre, writing and directing the musical, “A Quiet Moment.”

Beyond writing, Marc works as a voice-over talent and can be heard throughout Singapore, Southeast Asia and the US. He is currently at work on a sequel to “The Other Side,” as well as a novel that he might actually finish. His two children, nine-year-old Noah and seven-year-old Zoë, are his harshest critics.