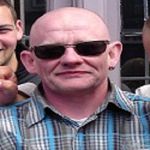 First-time writer – Dee Wilson – Grew up in a middle-class suburban area of East Belfast at the height of the Troubles and like the vast majority, fell into the trap known, in Northern Ireland, as religious bigotry. However, Dee was one of the lucky ones, and his saving grace was Rock ‘N’ Roll’s bastard child - Punk Rock.

Dee is someone, who says it how it is without fear of offending. The Trinity is no different and this is why he believes it may even change the way Northern Ireland is perceived.

Gets you a signed paperback edition, includes e - book version - you also get your name printed at the rear book the book with letter of thanking one and all.

To view copy and paste -- https://www.youtube.com/watch?v=qEgUgjVxCKM

A limited edition USB (credit card style) pen drive - containing an e-book version, along with all the interviews carried out throughout my research - the story told by those who made it happen.

A limited hardback copy, each numbered, with a printed letter thanking each person individually, making the book both numbered and personalized . includes e-book version.

to view copy and paste https://www.youtube.com/watch?v=sdaFEIEAsjI

The original photo was taken on the 12th January 1978 at the Pound Music Club, Belfast, during a double billed gig featuring Rudi and The Outcast.

The image made front page new the following morning, the headlines reading - who loves to hate you baby.

To view copy and paste https://www.youtube.com/watch?v=sdaFEIEAsjI

The Image was also used to name the Book - Makes you want to spit, published in 2003, and was again on the front cover.

The Good Vibration Movie was based around that same night.

The Tale of the Third City

The true yet untold story of the Ulster Punk Scene that tells of the friendships and connections made with Punk's elite on London's Kings Road prior to the big explosion of 76.
The uncut version that really needs to be exposed, as it proves that Ulster, unlike the rest of Britain, didn’t just follow London - the Trinity happened simultaneously.

Since the birth and demise of Punk back in the early 70s, the same old debate, as to where it all began, keeps popping up - was it New York or was it London and with this being the 40th anniversary of Punk, we are still none the wiser. Those of us, who followed the movement closely, are familiar with both sides of the argument but none would dare to answer this delicate question.

The Punk Trinity won’t solve the argument; however, it still remains an important story that not only brings a new twist. It gives a vital account of what really happened, here, in Northern Ireland, particularly in East Belfast and County Down during the mid to late 70s. It tells how Northern Ireland, innocently, became an important player in the movement but it is by no means, a cheap attempt at re-writing history. It merely amends the story we already know and love. Filling in the gaps and correcting the narrative to this Belfast’s untold story.

The Tale of the Third City – is set in Belfast during those dark days of the Troubles and reveals a hidden secret very few were aware of - a sub-cultural movement known as the Young American’s, the forerunners of the Ulster Punk scene who regularly mixed with Punk’s elite on London’s Kings Road prior to the Punk explosion of 76. These creative; innovative and forward thinking people who, against all the odds. Helped create (collectively) with others in the southeast of England and New York, a movement that not only went global but actually changed how the world looks and sounds today. So far the Belfast / County Down story has yet to be told in full.

To date, Punk icons the length and breadth of Britain, who followed in the footsteps of London’s Kings Road have long said, before Punk there was nothing. Well, that may have been the case in Manchester, Birmingham, Liverpool and Glasgow or any other mainland town or City in the UK and I can prove this. Footage from the BBC’s Arena Programme “” where Jordan, the charismatic shop assistant, states fifteen minutes into a chronologically made documentary - “” - An hour and
twenty-minute-long program, telling of the four-year life span of Sex and the Sex Pistols.

Jordan’s quote, fifteen minutes into this program, proves that those kids from Northern Ireland were making their trips from mid to late 74, long before the nation had been rudely awakened to Punk Rock and a year before Mr John Lydon aka Johnny Rotten had set foot in Sex.
In her statement, there was no mention of Scotland, or of Wales or any other town, city or village in England.
She clearly states, meaning the suburbs of London, I presume.

The Trinity brings to you the individual stories from those who were making those trips to London in the early 70s e.g. Paul Stockman, Clifton Boylan, Alan Revel and Greig Keyes, to name but a few who were mixing with Westwood, McLaren and even John Lydon himself.

Set at the height of the Troubles, this group of people knew no fear; they saw no boundaries nor did they let any obstacle get in their way.
The Class and Social barriers meant nothing at all to these YAs. The religious barriers were simply pushed to one side, as were the sexual barriers, with its
laws and regulations. They too were trailed down with a show of defiant contempt. It’s important to remember, it was at the time, more than just frond
upon to be Gay in Northern Ireland, it was very much illegal and carried a jail sentence.

This defiant, teenage reaction against society, lead too many changes across the Province of Ulster. First came the change in the laws on homosexuality, which
opened the doors of the world to the many Gay men and women living in the Province but even more important. This, albeit unintentional, lead the way for
peace in our Province. The start of integration, the cohesion of a new generation who introduced diversity to this troubled land. Who brought equality and showed
tolerance and respect to one another as the sowed the seed of peace and watched it grow.

The Trinity is unlike any other to come out of Northern Ireland, its main objective is to tell Belfast’s – Ulster’s untold story but it
also dares to question, in the opening chapters, the many myths, and mythologies regarding how and why the Troubles first started.

It displays an entirely different imagery to the one commonly used. The burnt out cars, the British Soldiers patrolling the
bulldozed streets, mutilated bodies lying in back alleyways. Is not the Belfast Dee Wilson grew up in.  Life was very
different in his middle-class suburban hideaway. There are tree-lined streets, pavements met by hedgerows and lush green lawns with pretty little flowers
grown in every garden. This is where the Ulster Punk scene first began and the time has now come to tell the real version.

So if you’re a historian, a music lover, a fashionista or you’re just looking for a different twist to the stories you already know and love. Well then look no
further, because The Punk Trinity – The Tale of the Third City is right up your street and who knows, it may even change your perception, the way you and many others see Northern Ireland and that on its own would be a good thing don’t you think?