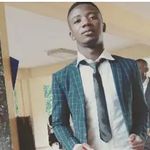 Obaino Chris is the Author of 10 Powers of the Greatness, The Wrath Of The Dead, Banal of Beggars and 7 Secrets To Success...

Obaino Chris is an  internet entrepreneur who writes and edits content for websites, annual reports, newsletters and Expert in the field of search engine optimization(SEO).

This is Obaino Chris's first novel, a non-fiction work, "The Wrath of the Deed" and on his book title list in progress are The Banal of Beggars and 10 Power of Greatness.

Receive "The Wrath of The Dead" eBook Edition (PDF, ePUB, MOBI). This is a special and limited quantity and limited time reward.

Receive your own copy of the book "The Wrath Of The Dead" limited offer.

Receive your very own copy of the book "The Wrath Of The Dead" 1copy + eBook included.

Signed copy of the book, "The Wrath of the dead" personal email, bumper sticker, button

Receive 5 copies of "The Wrath of the dead," and your name mention in book acknowledgement as a patron sponsor. See your name in the printed book and I'll personalize your copies.

Have your company name and logo printed on a page with description of your business. include 3 pack.

Receive 75 copies of "The Wrath of the dead," for executive teams or employees. This reward includes special recognition in the acknowledgements section of the book.
This offer is for Corporate sponsors that would like to use it for publicity and events
Institutions of higher education that want to make the book available to
students at a discounted rate
Non-profit organizations that subsidize historical projects or would like to sell the book to raise money for their missions

The Wrath Of The Dead

"The Wrath Of The Dead"is a documentary on the history of reach cultural heritage of Enugu Ezike, the largest single community in West-Africa and a true life story of Ndishi.

Embed The Wrath Of The Dead

The Wrath Of The Dead is a documentary on the history of rich cultural heritage of Enugu Ezike, the largest single community in West-Africa and a true life (Ndishi) story have been in existence for many decades and it is believe to be watch of the gods and their four-father over family where the secret of the deed wife did was brought to light by a cause beyond human being physical conception and the story has predominantly occurrence in the family of most people in the community and of cause which i have witness some of them the community Enugu Ezike happened to be my home town.

Here's is what makes my book unique:-

This book will give you detailed history of Enugu-Ezike cultural heritage and the story of Ndishi age long tradition which makes Enugu-Ezike women turn to be most beautiful bride in the whole South-eastern part of Nigeria and this culture has remain binding on all Enugu-Ezike oba descendants even outside the shore's of their town, including foreign country and any women married to an Enugu-Ezike indigenes from any part of the world.

PART ONE. History of Enugu-Ezike.

Section 2.2. Ndishi the spiritual being.

Section 2.3. Binding on all Ezike-oba descendants.

Section 3.3. Journey to the village.

The general outline and wireframe of The Wrath of the dead is complete, along with about 50,000 words. But there are a few things left to do before you get the book.

My monetary goal was definitely modest, but my ambitions for this project are not. All donations collected will go towards making the book professionally designed, edited, and printed.

If you'd like to help me reach my goal, please click on the Blue "PRE-ORDER" button if you are able to. If I reach my goal by the deadline, the amount that you pledged will be charged. HOWEVER, IF I DO NOT REACH MY GOAL BY THE DEADLINE I WILL NOT RECEIVE ANY OF THE PLEDGED AMOUNT AND YOUR CARD WILL NOT BE CHARGED.

If you like what I have planned and excited to see the outcome, but do not have the funds to pledge, please do not hesitate to share my Publishizer page on your social networks or with your friends! All of your help will be greatly appreciated.

The African continent has always inspired rest of the world with its unique culture and roots in human origin. It is believed that the word Africa is derived from ethnonyms ‘Afer’ and ‘Afri’, while some believe that it came from Afrigii and Afridi, supposed to be derived from ‘Afira’ meaning ‘to be dusty’ in Arabic. The present day English version comes from a term in Latin—Africanus. It was in ancient Africa that the hominid subfamily and the genus Homo were found with only one surviving-- Homo sapiens. Archaeological research and genetical evidence also supports the theory that evolution of modern human species occurred in Africa. The Hominid family of species to which we belong, the Australopithecines, separated from the ancestors of modern chimpanzees between four and six million years ago.

With The Wrath of the dead been one of the book among other books that talks about the rich culture of Africa, it will be specifically for the set of people who love Africa culture in general and for Africa in diaspora as point for those who love to know more about there root...

This is reference guide to African history which provides substantive entries on 36 watershed events that shaped the history of the continent from the prehistoric past to the dawn of the 21st century.

First published in 2002 by Greenwood Press

Africa and Africans in Antiquity assesses recent historical research and archaeology under way in Egypt, North Africa, the Sudan, and the Horn of Africa. These ten thought-provoking essays demonstrate that this large region was an ethnic and cultural mosaic in antiquity, a place where Phoenicians, Berbers, Greeks, as well as Egyptians and Nubians interacted.

The partition of Africa was one of the most spectacular episodes in modern history. For Europeans, Africa was still an unknown continent in 1880. Thirty years later almost all of it was under European control. This race for colonies went hand in hand with a host of thrilling exploits and dramatic conflicts, of which Stanley's exploration of the Congo and Gordon's death in Khartoum are just two examples.

This succinct, authoritative, and engagingly written history of Nigeria from its earliest beginnings through 1998 provides an excellent introduction to the country's history. Constructed around the two interrelated themes of politics and the economy, it relates the development of the Nigerian people from antiquity through the end of 1998.

The study of strange and wonderful events which have occurred in this land before, and the annals of kings and learned men

Article on The indigenous people of Enugu Ezike in Igbo-eze North Local Government Area of Enugu State and how they are known for their hospitality to strangers.