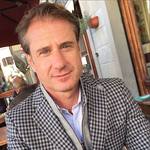 Robert Strand is a creative pragmatic soul, with a deep appreciation for puns. Recently, he has been focused on writing to bring human stories to life for print, stage, and film.

Robert is a creative pragmatic soul, with a deep appreciation for puns. Recently, he has been focused on writing to bring human stories to life for print, stage and film. In doing so, his hope is to inspire, bring clarity to current issues and show that through love, asserting oneself to do the right thing is possible.

The story, ‘Why Not’, was inspired by a photographer friend of Robert’s, Mark Maziarz, who photographed a series of antique sporting goods; among them was the black and white, red lettered Why Not golf ball. Over dinner one night in Park City, Utah, Maziarz shared an incredibly moving story about how a framed print of the Why Not golf ball kind of saved a friend’s life. A friend of Mark’s had withdrawn from life having lost the love of his life, his wife and mother to his two sons who had also both recently died. The man had just said to God, ‘Why should I continue living?’ when Maziarz knocked on his door. Maziarz gave his friend the framed photograph of the Why Not ball in an attempt to cheer him up not realizing the significance of the timing. His friend re-engaged with life and was inspired to move forward.

Upon hearing this story, Strand and Maziarz bantered over how the golf ball made it from its initial owner in the early 1900’s to modern-day Park City Utah and into his photography studio. Historical fiction is a genre that inspires Strand, and over the course of the next six to eight weeks the story of ‘Why Not’ fell out of Strand’s head. What a wonderful, simple two-letter phrase to inspire anyone - no matter one’s race, religion, sexual orientation or status in life.

Why Not is the story of 6 fictional characters over the span of 100 years that starts with Antoinette Secard, a self-made woman who passes as white but is of mixt race in the early 1900’s. Having studied Meisner Acting with Wendy Ward, he is inspired by living truthfully in imaginary circumstances; issues of people’s differences have fascinated Robert for as long as he can remember.

Strand is the youngest of three children in his family. Thinking they were no longer able to conceive, Strand’s parents adopted his middle sister at birth in 1966, and as Robert puts it, the most wonderful and delightful surprise arrived in early 1968 – him. Around the time Robert was born, his middle sisters soft and beautiful baby hair fell out, and she grew an afro; only then did Mr. and Mrs. Strand realized their adopted daughter was biracial. Picture Ward and June Cleaver, Civil Rights movement is in full swing in the mid-late 1960’s, with an 11-year-old daughter, and two children under 2 – one with pigment and an afro, and one practically translucent white blond little boy. In hind-sight, it’s hysterical.

For the author, life was amazing, challenging, full of laughter, and simply life as he knew it. Mr. Strand senior was the only child born in 1925 to Norwegian and German immigrants and was the epitome of Scandinavian pragmatism; his organic instincts were to love and protect his children. Mrs. Strand, with every nursing degree available, grew up in a life of privilege with one sister; her organic instincts were to nurture and love a family larger than she had known and inspire her daughters to be whatever they wanted to be – given her options had been housewife, teacher or nurse.

Strand loosely drew inspiration from his family and life experiences in creating the six main characters in Why Not and hopes you enjoy this story, the first of a series of books based on unique and inspiring objects photographed by his friend Mark Maziarz!

$480 Signed Copies with Zoom Meet and Greet with Author.

For orders of 24, the purchaser will get signed copies of the book plus a zoom meet and greet discussion with the author.

For the first 50 single purchases, the author will personalize an inscription in each book.

A purchase of 90 signed copies will include a 30” by 30” signed and numbered print of the Why Not golf ball out of a limited edition of 90 prints, as well as a zoom meet and greet with both the author and photographer Mark Maziarz.

The retail value of the photographic print alone is $1,990.

Thank you so very much for your support of my book, Why Not.

Quick update - I'm in conversation with two publishers, and continue to finish the manuscript.