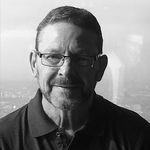 Born in Scotland, Russell was among many things, a professional soccer player, an Insurance salesman, labourer and crane driver before leaving for Australia (the lucky country)
Business life in Australia has varied from roles as Marketing Manager, Senior Management Roles, Real Estate Principal to Company Director.
As a successful business man and director of a translation business he recently stepped down to concentrate on his next exciting venture, writing crime novels.

A day without working on his novels is very rare for Russell who finds his greatest joy in creating characters and unfolding stories. He needs to fulfill his ambitions. Dreaming of being an author as early as his formative years in school, his fate took him via a long and interesting road to the present where he can now commit all his energies to writing fiction crime.
Russell emigrated to Australia over 40 years ago and has called Brisbane home since that time. Brisbane is the best place in the World to live. It is booming, there is this energy and dynamics that can be felt in the arts and culture.
The move has seen him kick many personal goals
Finding a character and a suitable name was at the top of Russell's priorities some two years ago when he finally made the decision and commitment to start his first crime novel. Within a few weeks he had decided on the character, his location and a planned series of books involving the character.
Harry Cram, Investigative Journalist was born.
His love of Edinburgh made the decision easy as to where his character would be based. His first 20 years in life living there and many visits to the old country has amassed oodles of local information for his character and stories.
He is also assisted and advised by a very experienced and retired Scottish detective in the more technical aspects of policing in and around Edinburgh.
Authenticity is important to Russell in his novels and you will find that almost all the locations, businesses and premises are actual places that can be visited.

Bonus description
+ 100 print copies delivered direct to you
+ ePub copy of the book
+ PDF copy of the book
+ Free copy of the second novel (Everlasting Guilt)
+ Your personal name used as one of the characters
+ Your Company banner and link displayed on the home page of www.harrycram.com for two years
+ Personalised thank you inside the books

Edinburgh's underworld freezes when three people are found murdered in 66 Windsor Place.
Investigative Journalist Harry Cram is the prime suspect. Police Scotland and Cram run concurrent investigations. Who will be the first to solve the henious crime.
They will also have to deal with Edinburgh's most sadistic criminal who runs his organised drug ring from within Edinburgh's prison walls.

When Harry Cram, an Investigative journalist returns from Australia to settle back into Portobello he has no idea that he will become involved in one of Scotland's most notorious revenge killings.

During a visit to prison to see a friend he bumps into an old school girl friend. They begin an affair that has to be hidden from her husband Alf "Billy Bunter" Hunter, one of Edinburgh's most sadistic and malevolent criminals, who is currently serving a long prison sentence whilst still running his drug dealing empire from within the prison walls.

On Friday the thirteenth of November, Harry's life is turned upside down when he finds his partner and her two daughters murdered in 66 Windsor Place. Now he has to deal with not only the police but also her criminal husband.

Harry and two close friends team up to create their own private investigation into the murders. Things become more complicated a week later when Alf Hunter's Solicitor is found dead at a beach south of Portobello with a single gunshot wound to the head.

DCI James Scully a lifelong friend of Harry Cram is put in charge of both cases jeopardising their long term friendship.

In the middle of all the turmoil Harry has to urgently visit China where his daughter from his first marriage is dangerously ill. While in China he receives some stunning information from his contacts in Shanghai that throws the investigation upside down. Systematically some of the people who may have the answers to the crimes start to die.

The Scottish police force hold the key to solving the crimes. Or do they?

The potential market for this novel is geared to the age range of 16 - 80 year old which represents a potential of millions of people.

The primary target market can be defined as follows

1 Scottish people in and around Edinburgh

The secondary target market can be defined as follows

1 Scottish people around the world

2 Everybody  around the world

The initial funding from this campaign will be utilized for professional editing, graphic design and website development.

An extensive social media campaign including Facebook, Twitter and Blogs will be undertaken prior to the book launch which is planned for July 2017 to coincide with the Northern Hemisphere summer.

The second Harry Cram novel (Everlasting Guilt) will be released at the end of 2017 in time for the Southern Hemisphere summer and the busy book buying period of Christmas in both Hemispheres.

1  Rather Be The Devil - Ian Rankin

There is absolutely no argument that the above mentioned novels and authors are in a class of their own and have contributed greatly to the Scottish Noir.

Harry Cram is also in a class of his own breaking the mould but not the rules. Edinburgh is ready for a new hero. 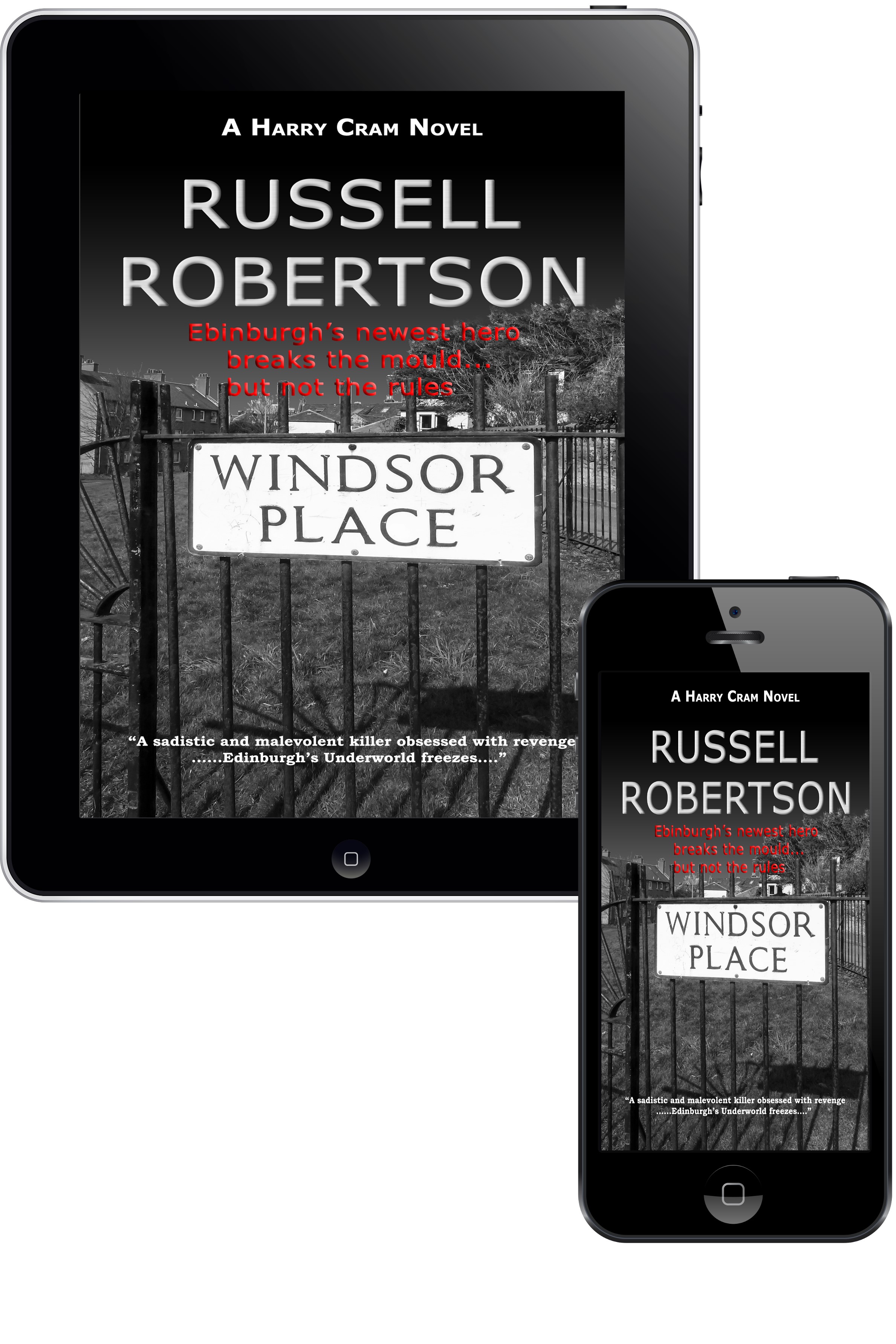 The Brass Monkey pub in Leith Walk was not somewhere that Harry would have selected for a meeting with Raffles but it was his call and his local. Some would even suggest his second home. There was nothing wrong with the pub, just the location. Leith Walk and the surrounding streets were always impossible to find a car park. The landlord was easy going and well known for his lock ins at the weekend which went on into the wee small hours. Only locals were allowed access, definitely no strangers. Except of course the local plods. His investigative nose carried him onto the pub.
He picked a vacant bar stool at the far end of he bar and ordered a half pint of IPA from the barmaid while he waited for Raffles to arrive.
The barmaid seemed friendly enough even though she had more body rings than Long John Silver and more tattoos than any sailor he had ever seen.
Her red and blue hair was a stark contrast to her sickly white skin and her clothes looked like they had been personally selected from the local second hand gothic shop. As he stood at the bar sipping his half pint he wondered what the reaction would be when she was taken home to meet her boyfriend or girlfriend’s parents.
The place was reasonably quite. A group of old fellows were huddled in a corner with their half pints and dominoes. They both looked like they were made last century. A couple of young studs sat at the bar looking as though they were up to no good and an elderly man and woman were arguing about money near the poker machine. Yes, this was definitely Leith. Where else would you prefer to be on a Monday afternoon?
A hefty pat on the shoulder signalled the arrival of his friend. 'How are you auld yin? Mine's a pint of Tenants lager and get yourself another one while you’re at it.'
Harry coughed due to his heavy cold.
‘Sore throat sucks, eh Harry?
Raffles moved over to a vacant table and waited for Harry to shout the drinks and join him.
There was a slight kerfuffle going on at the front door as Harry arrived with the drinks.
'Don't worry about him. That's just Ali Khan better known as Sideshow Ali. He's the mad Orcadian. Totally harmless, virtually lives here. Wanders around singing "I swear to drunk. I'm not God" and talks to imaginary people. Never caused one spot of bother in all the years I have been drinking here. Couldn't organise a piss up in a brewery and perfectly safe. I think he's the one that John West rejected and he shops for everything on the five finger discount.’
He was the kind of person that was almost impossible to watch, while at the same time hard to tear your eyes away from. You imagined that if he took off his hat and smiled he would have straight hair and curly teeth.
'Nice place.' whispered Harry. 'I love Leith, I love its ugly beauty.'
‘C’est la vie.’ Replied Raffles.
'Anyway, I have the names of the Team Alf you asked for. Best not mention their names in here.' Raffles slid over a piece of paper. 'They're in there, don't know that it will help you much.'
'Thanks, much appreciated.'
Harry in turn handed Raffles an envelope. 'In there are the names of a couple of local bigwigs and some reasons why I suggest you look into them. I'm sure you'll find some juicy stories there. But be careful, they are powerful people with powerful friends in high places.'
'Why are you giving them to me?'
'I'm not going to be able to follow up on these at the moment and someone needs to carry on my investigations and nail them. I can't think of a better person than you to dig up any shit on them. They're nasty pieces of work and need to be brought to justice.'
'God be with you Harry, I owe you one.'
'Cut out the religious crap. It doesn't suit you. I bet the last time you went to church they tried to drown you. Just be careful, there is a lot of submarine activity going on there.’
‘What do you mean?’
‘Let’s say there is a lot going on under the water.’
Harry finished his drink and left Raffles ordering another. He knew he had buckley’s chance of getting out of there sober.
Harry made his way down to Leith Links where he had parked his car.
None of the names of the prisoners were of interest to him but the name of the non-prisoner was. Nugget Reid.