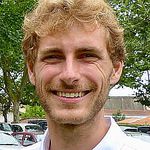 Baptiste Delvallé visited over 30 countries and lived in 3. He mingled with expats, displaced people, travelers at heart, and home bodies all over the world.

Baptiste Delvallé was born in France and grew up in a peaceful village that had everything to make him happy. But when he was 13, his parents went bankrupt and the family had to move to the big city. Traumatizing at first, that became an exciting life of traveling and moving everywhere. Delvallé lived in other parts of France, years in the US, and was an expat in Vietnam. But was he feeling home? Unsure of the answer and inspired by all his time abroad, including a year-long world tour, Delvallé decided to put down his feelings on paper. Now 29 and back in France, Delvallé writes for education blogs, including EdWeek, and regular contributions to Innov'Action Pédagogique. He also uses his short stories and travel writing in his class with his students.

You'll get one paper copy of the book, along with updates on how the book is doing until it gets published and invites to book launching events.

You'll get two paper copies of the book, along with updates on how the book is doing until it gets published and invites to book launching events.

You'll get three paper copies of the book, along with updates on how the book is doing until it gets published and invites to book launching events.

You'll get four paper copies of the book, along with updates on how the book is doing until it gets published and invites to book launching events.

You'll get five paper copies of the book, along with updates on how the book is doing until it gets published and invites to book launching events.

In addition, you will get acknowledgements in the book!

You'll get ten paper copies of the book, along with updates on how the book is doing until it gets published and invites to book launching events.

In addition, you will get acknowledgements in the book.

The author will also give a conference about the topic of home at your private event. The conference will be live or an e-conference depending on your location.

In addition to 20 personalized, signed copies, you will get to experience a week-long retreat to define home. The retreat will take place in the South of France with the author and will include philosophical discussions, write-to-think exercises, and touristic walks. Fare and accommodation are not included.

A worldwide journey in search of home, from roots to expatriation and moving everywhere

What is home? Is it where family is? Where the heart is? Or under the tropics? This is my experience of defining it while traveling, living abroad, and coming back.

When I was little, I did not even think of what home was. It was simply where I lived, with mom, dad, my brother, and my sister. A house in a peaceful French countryside surrounded by woods.

But when my parents announced that we were going to move to the big, polluted, concrete-filled city, I was devastated. Uprooted, my "Intro to drama" teacher said years later. But was I uprooted?

My move to the city led me to rethink home, and I willingly moved multiple times as soon as I reached 17 years old. To other French cities, to the United States, on a world tour, and to Vietnam. And back to both the US and France. All that time, I was happy or satisfied, but did I feel home? And what made me feel home?

I met a plethora of people who felt uprooted, derouted, or rerooted –many who were lost, many others who were happy to be where they were, and many who were wondering what makes a home for them.

This book puts my thoughts down, reflecting about expatriation, international lives, abode, ownership, doubts and decisions. It exposes my experience, and hopefully will help many of you reflect on the topic... and find home.

(An exploration of what it is to have roots, to be uprooted, to lengthen your roots, and not to know you have roots)

(A person sure of where is home)

(The freedom and trap of moving whenever we want. The world is ours!)

(An exploration of the importance of ownership to feel home)

(The importance of family to feel home. Is home where our loved ones are after all?)

The vignettes are all directly based on conversations with other people who yearn for home or have found it.

This book is for expats and other people living abroad or moving frequently, it is for those who are no longer where they grew up, or who have never left but feel they should leave.

There is nothing like a good network of international people all over the world to spread the word about home: we're all wondering about it!

People in 4 different US states, in Vietnam, in France, in Australia, are all wondering about home and wanting to read my reflections about it. A group email goes a long way!

At Home in the World: Reflections on Belonging While Wandering the Globe

Home Sweet Anywhere: How We Sold Our House, Created a New Life, and Saw the World

Your Keys, Our Home.: The Senior Nomads Incredible Airbnb Journey

By Debbie and Michael Campbell

When I was a student at Willamette University, in the US, I took an “Intro to theater class”. I was truly interested in theater. I love going to plays, I always thought acting might be kind of fun, and I was eager to learn about costume making, stage sets, and lighting designers. I found out I was the only one who was not in it for an easy A. Well, it turned out I almost didn’t get an A –because my feelings weren’t aligned with those of the instructor.

For our final project, we had to talk about a personal story that had marked us deeply. As a class, we went around to different locations and listened to each one of us dramatically tell our marking moment. The instructor wanted suffering, he wanted tears, moments that left the audience speechless and thinking. He got it: a father beating mother and son, a kid involved in drug trafficking bringing his life to destruction, another getting shot in a gang affair. All I could think of was when my parents went bankrupt and we had to sell the house to move from our idyllic village to the urban city.

My life’s been happy, really. Very happy. I wasn't beaten, didn’t traffic cocaine, and was never shot. I’ve had wonderful parents who still love each other madly, who gave us the most amazing upbringing they could give us, two siblings I quarreled with all the time but who never tried to choke me in my sleep or throw me off a cliff, and the first half of my life was spent in a village surrounded by pine forests and only a half hour from the beach. Having to sell the house when I was 13 did affect me. I felt ashamed that we were no longer owners, that my mom wouldn't live the leisurely housewife life she had been living, and that, worst of all, I’d have to move to a smaller house, maybe with no yard, in the city. You got it, when I grew older, I realized it was nothing that tragic.

Well, apparently I wasn’t involved enough in the project, I did not take enough personal risks. That’s what the report card for the ‘intro to theater’ class said. I hadn’t managed to show how that experience made me feel uprooted and that ever since, I’ve been wandering the world, not finding anywhere for my roots to sink in. Now, I agree, that would have been a much more dramatic skit, much more theatrical, and slightly less distant from the shooting and beating. The problem is it would all have been a lie.

After moving from Marcheprime, a peaceful village of 4,000 surrounded by woods where I loved to go on adventures, to a forest of concrete, car noises, and smog, with no escape ever in sight, I did feel lost. I didn't belong, I hated every inch of the place, cried many nights, and found my new classmates grossly disconnected to the real world. Many had never left their urban bubble and they’d ask such questions! Do you eat fruits right off the tree? Did you sleep with sheep in your bed? Do you walk in the woods by yourself?

But it certainly never crossed my mind that my roots had been taken off their soil. Or rather, it didn’t feel like it mattered. Each time I visited Marcheprime again, I looked at my house with nostalgia, but it didn’t take long before I felt like it had been altered in such ways that I’d never move back there. As I grew into a high schooler, I also felt I didn’t need to ever move back to Marcheprime, which really was a rather ugly village and whose forest was being cut down for new developments anyway.

My roots were certainly not there anymore, and they were not in the city either (with all that concrete, there wasn’t much soil to dive in). I didn’t feel they were looking for anywhere to go though, in fact I didn’t feel like I had roots.

As I grew older, I felt blessed that we had to move. I felt it taught me that anywhere could be my home, that the world was mine. When it was time to go to college, even though in France people simply stay in the city closest to their home, I longed to go somewhere else. I chose a city I had never visited, surrounded by mountains where I could hike on the weekend. I also applied to a school in Abu Dhabi, and later regretted not applying to schools all over the globe.

Barely a few months in my new city, well established in the first “home” of my own, a tiny studio apartment with my first own bed, own forks, own computer, I was already thinking of leaving. I applied to a study-abroad program, and finally decided on a year as a teaching intern in a French immersion school in Minnesota. There, I rejected all the other interns, not wanting to re-create a mini France. I sought to meet as many Americans as possible.

It was just for a year, and I returned to France, changing university to another one, specifically because it had great exchange programs. Three weeks in and I was already selected to go to Willamette University in Oregon the following year. That city in France made me wonder if I might want to stay. It was the first place in that country since I moved when I was 13 that had made me feel like I could stay there. People were friendly and more interesting, I met many Americans who lived there and made friends with them, I was just a train ride away to other countries, and the whole place was vibrant with things to do and life at every corner.

I felt the same when I got to Willamette University. That’s the beginning of the problem, maybe. When I started feeling several places were just right for me to live in.