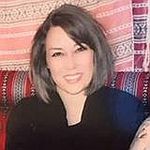 J.M. Sullivan grew up in Avondale, Arizona with a love of dogs, education, books, and writing. She wrote her debut novel, Alice Z during her career as an educator. Currently, she is living in Abu Dhabi, UAE with her husband and two children as a Cycle 2 Science Teacher. She incorporates her love for literature, science, and adventure in her work, creating an exciting world any of her students would love to explore.

J.M. Sullivan grew up in Litchfield Park, Arizona and loves dogs, education, books, and writing. She wrote her debut novel, Alice Z during her career as an educator. Currently, she is living in Abu Dhabi, UAE with her husband and two children as a Middle School Science Teacher. She incorporates her love for literature, science, and adventure in her work, creating an exciting world any of her students would love to explore.

When she is not reading and writing fiction she can also be found creating professional documents to share with other teachers. As a Teachers pay Teachers seller, Julie has published and sold over 30 different lesson plans and resources in her areas of interest: Science and Ancient Civilizations

Receive Alice Z as an eBook upon its release and a notification of the book launch.

Receive an eBook copy of Alice Z as well as an advanced copy of Alice Z before it is released. (Readers outside of the U.S. will also receive a discounted shipping rate)

Receive a copy of Alice Z upon its release.

Receive a paperback copy of Alice Z upon its release with completely free shipping around the globe. This offer is only valid for the first 30 pre-orders.

Receive a signed paperback copy of Alice Z upon release.

Receive two paperback copies of Alice Z upon release. It's no fun running from momerath on your own!

$100 Be A Minor Character Sold out

You will get a minor character in the published edition of Alice Z named after you and you will receive a signed paperback copy.

To save her sister, a young girl must track down a mysterious pharmaceutical doctor to find the cure for the 'undead-ly' Momerath Virus.

Alice Z is the harrowing story of a young girl fighting to find a cure for the Momerath Plague that has devastated the world. Her sister has contracted the virus and Alice is the only one who will brave Wanderland to save her. In her adventures she meets Chess, Waite R. Abbott, the Red Queen, Matt Hatta, and other fantastic characters who help and hinder her along the way. Will she be able to find the cure and save her sister? Find out in Alice Z!

In the first section of Alice Z, readers will be introduced to

Alice and the momerath. Readers will follow her as she ventures down the
Rabbit Hole into the terrifying world of Wanderland.

The second section of Alice Z brings readers to Borogove Industries where they must escape a horde of rampaging momerath.

Section three brings Alice and her new traveling companion to

the heart of Phoenix, where they must meet with a local conspiracy
theorist to learn what they can about Wanderland, the momerath, and
Borogove Industries.

In section four, Alice arrives in Tulgey Wood and meets with the Red Queen. During her stay, she makes a new ally and gains assistance in breaking into Borogove.

The fifth section of Alice's tale finds our hero trapped inside of Borogove with Matt Hatta and a swarm of raging momerath.

Section six brings some new
information to Alice in her search for the cure, including a discovery
that changes everything she once thought to be true.

The seventh and final section of Alice Z concludes the story  with a  confrontation between Alice and someone she trusted. The antidote has been found, and that is the end. Or is it?

Alice Z is appropriate for multiple age levels starting with the Young Adult audience and extending to mature readers for Fantasy, Horror, and Science Fiction Genres. Alice Z is a thrilling fiction story that crosses several genres to appeal to diverse audiences.

Social media will be the main platform used for reaching Alice Z's target audience. Personal and professional social media pages will be used to spread awareness of Alice Z's publishing campaign to family and friends as well as share updates of campaign progress with beta readers and supporters.

During the campaign, daily updates and reminders sharing the Alice Z proposal and encouraging readers to share the campaign will be sent out.  Contacts range from all around the United States as well as a large international community through overseas teaching networking, giving the potential to reach a large market.

As Alice Z gains a following, readers will be thanked for their support and encouraged to track the progress of the campaign to create a huge air of excitement leading  to the release of Alice Z!

Alice Z is a retelling Lewis Carroll's classic tale with a scary spin- zombies! Although this concept has been explored (White Rabbit Chronicles, Insanity), J.M. Sullivan's book is an intriguing adaptation that both lovers of Carroll's work and the undead will enjoy. She incorporates Carroll's classic characters with a fresh twist that makes them  recognizable yet intriguing at the same time. Readers will not only enjoy the adventures of Alice and the thrills of momerath chases, but will also be delighted in matching beloved characters with their revamped counterparts, making Wanderland a true Wonderland.