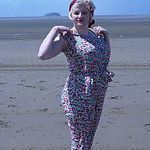 Rae Story is a writer, blogger and, if she does say so herself, political essayist.

Blogger, political and personal essayist, Rae Story has written for a diverse range of outlets, from Ms Magazine to Mumsnet, from The F Word to The Morning Star.

In her first polemical outing on the sex industry, Rae coined the term Whoreburbia, which no-one ever used, a part from one cheeky 'ain't the sex industry splendid?' upstart, and then only to subvert the meaning. An online frisson that no-one, even the main protagonists, paid any attention to. It seems likely that Russell Brand had released another of his seminal videos on the merits of vague, green tea fuelled Anarchopulism that day, and there simply wasn't time.

What concerns Rae, in essence, are the ways in which differing groups of people seek to legitimise the commercialisation of sex, sexuality, womanhood and relationships. It is what keeps her from going back to sleep at night after her early morning trip to the latrine, and she deems it high time these personal obsessions ought to be fictionalised.

If you are my digital buddy and are willing to hiccup up a round tenner, you will get Nye's litany of bad wisdoms and stupid decisions delineated for you in the form of a 'digital copy'. I will write it, and someone more clever somewhere else with convert it into 0s + 1s. In fact, they are doing it right now. Show offs.

If you are in my hard copy cohort and are willing to cough away a twenty, I will personally go and chop down a tree (not really) upon which I shall scribe Nye's part life (again, not really). In any case you will get a copy with which you can cuddle up in bed with, and probably have a good cry. You will also get a digital copy for reading on the bus.

As one day I will find myself becoming very busy and important, a signed personalised message from moi, on the inside of your hard copy, will likely become a useful investment on your part. By likely, I mean roughly in the ballpark of likelihood as seeing an articulate runner bean strolling into a library to ask for a copy of anything written by Paddy Ashdown.*

As previous, your real life copy comes accompanied with a digital version.

*I promise the novel shan't contain any more of these terrible please-like-me-I'm-quirky 'jokes'.

We all love to be acknowledged. In this package you will get the signed copy, with the digital version, and your name lovingly inscribed into the 'with thanks to' page. I will also send platonic thumbs up to you, into the very ether.

What could be better this coming (urm, Shrove Tuesday?) than buying a book for a mate? In this package you will get two hard copies, signed, with added digital copies each. If your number two is your soon to be spouse, the book - once read or otherwise - can double as wedding confetti, if fed into a domestic shredder.

Double the above, you will receive 8 hard copies, signed, with accompanying digital copies, an acknowledgment in the back of the book, your name implanted somewhere in the narrative **and** a special thank you letter, including otherwise secret information of the genesis of the story, the protagonists and background. With love, from Rae!

“The glamour, the freedom, the verve… in prostitution? Hallucinations. I still walk around with them, like shreds from a slick fight film.” So says Nye, a failed aspirant, whose trajectory through harlotry is interspersed with dipsomania and decapodic nightmares, and a general wishful sense that life isn't properly going to start happening until a much later date.

In 2000, Nye fell in to the chemist's back alley bathtub of prostitution. It was Newtown, Sydney,  and in the spirit of the laissez-faire, life and the locals had permitted the existence of a pink and dingy chocolate box brothel to light up the otherwise empty end of a long, cosmopolitan street.

It was going to be an experience, like trying oysters, or marijuana, or going inter-railing. Another in a list of things for an insistently triumphant and curious 18 year old to do.

But ten years have passed, and Nye is still incautiously operating her feet along the same washing line rope, dangled in among the back roads and basement flats of ten cities.  Still intermittent, still increasingly uncertain and still more or less 18.

But no matter, because the clock isn't ticking, and it won't until Nye gives it her say so. Life, as ever, has yet to start.

Nye tells the story of DECADE over ten years, in ten places, in ten sections. Nye also believes she can characterize her life using Aristotle's ten categories, but she relates to the theory neither methodically, passionately, nor well.

1.Sydney: Beginnings & at the brothel door.

Backpacking through New South Wales, Nye had intended to seek out work in Sydney, however her lack of ability to impress interviewers leaves her jobless, and running out of funds. At the end of a cosmopolitan street on which she stays - after the vintage clothes stores and chichi cocktail bars and ramshackle art galleries bereft of custom - is the brothel. Nye reasons that it is just one in a number of ways that imperfect people can seek out imperfect incomes.

2. Auckland: Going, and falling for Crysalis.

Nye forms a relationship with Chrysalis, a prostitute who travels from city brothel to city brothel, with one suitcase of designer shoes. Chrys impresses upon Nye the relative shoddiness of the Sydney brothel and tries to convince her to move to Auckland, where she is assured of a more grandiose prostitutional landscape. Though infused with self vaunting glamour, and sharp to a tee with men of money and status, Chrys is otherwise temperamental and manipulative - and Nye hopelessly craven and besotted. She buys both of their tickets.

3.Cardiff: Coming to the wrong side of the tracks.

Some time later Nye travels to Cardiff, and for want of anything else to do or anywhere else to go, moves in to a small, beige and dingy brothel in an unedifying, poor district. However, the narcotic and boozy subterranean society leads her to burnout, and so she escapes to the east Wales countryside, with a view of leaving ‘the prostitution experience’ behind her.

Nye begins a University education with an enthused aplomb, however, like the sober dipsomaniac who forgets the tumult, she begins to obsess over the money and petty glory of prostitution. She joins a shift at a local brothel, run by the tight-ship running and pathologically dishonest Madam, Fondant.

Nye, during a University summer break, takes a lone holiday to LA. There she spends most of her time on Venice beach, reading Kundera and Self. Becoming bored, and fettered by loneliness, she takes the greyhound bus to Las Vegas, to try her luck ‘escorting’ on the desert strip.

She moves on her travels to China, to work briefly in an English language school in the buzzing district of the Bund. Whilst there, she discovers Fondant has been investigated and charged by the police for brothel keeping.

Upon returning to England, Nye rents a mediocre apartment, and decides to set herself up as a local and, ultimately, disappointing ‘Courtesan’. She struggles with an alcohol problem, and oscillates between weeks of sobriety and drunkenness. Albert, a wealthy Russian, becomes her obsessive client who promises to Pretty Woman her away.

The last chapters I have left without synopsis to preserve the necessary secrecy of the final actions.

My potential audience consists of:

A collection of stories and first hand accounts from women in the sex industry.

An Irish bestseller, former prostitute Rachel Moran talks about her time in the industry and her political perspectives and reflections, from a radical feminist perspective.

A researched 'sex industry critical polemic' making the case against the industry and the narratives that promote it. This is a straight political non fiction, but I have included it to demonstrate the increasing popularity of books relating to prostitution.

Being and Being Bought: Prostitution, Surrogacy and the Split Self Spinifex Press 2013

By Ekis Ekman, a Swedish feminist regularly quoted for her work on the sex industry, this book draws on Marxist and feminist analysis to link prostitution with surrogacy. I have included this book, as 'Nye' picks up the book in the final chapters and is influenced, uncomfortably, by the arguments.

A collection of feminist essays exploring the deficits of contemporary, pop feminism. Though this is a academic work, I have included it, because the experience of 'Nye' in the novel, is one of a liberal, contemporary feminist, who cleaves to an empowerment rhetoric, even as her life is 'spiraling' out of control.