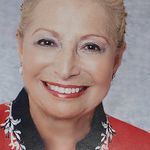 Nadia Shulman grew up in the USSR facing state-sponsored anti-Semitism. She is a retired physician, who visited over 100 countries. DOUBLE EXPOSURE is about her family’s tragedies and triumphs.

Nadia Shulman grew up in war-torn Soviet Union facing all the hardships of the state-sponsored anti-Semitism.   Her first husband died when she was four- month- pregnant with their first child.  She graduated from Kiev Medical School, published her thesis and a few professional articles, and remarried.   Risking everything she and her husband decided to emigrate and applied for the exit  visas. They arrived to United States with their two sons, two suitcases and ninety dollars and lived through many frustrating misadventures, hilarious mistakes and heartbreaking times but they were free! After passing qualifying exams and another three years of residency, Doctor Shulman practiced internal medicine and taught residents at Harvard and Tufts Medical schools. She is an avid traveler who visited over 100 countries. She frequently shares her travels on the local TV travel show. She has also served on the Board of the Russian Jewish Community Foundation and on numerous committees of the Massachusetts Medical Society.“Double exposure” is her first biographical book about family’s tragedies and triumphs.

Get a digital copy of the book at a steal of a price! Ebook delivered electronically.

Get a print copy of Double Exposure at a great price and support my efforts to get noticed by publishers! Includes the Ebook version as well!

Your name will be called out for thanks in the dedication, for all to see, and you'll get 2 autographed copies of Double Exposure so you can share with a friend. Also includes Ebook and unique Double Exposure oversized coffee mug.

In addition to 5 autographed copies of Double Exposure, and being thanked on the dedication page, you will receive 2 invitations to the Double Exposure launch party, and have a chance to meet and greet with the author in person. Also includes Ebook and unique Double Exposure oversized coffee mug.

Get a live video online 45 minute Q&A with the author for you or your organization. In addition, you'll get 10 autographed copies of Double Exposure, be thanked near the top of the dedication page, and you will receive 4 invitations to the Double Exposure launch party. Also includes Ebook and unique Double Exposure oversized coffee mug.

Get a live in-person 60 minute presentation and Q&A with the author for you or your organization. In addition, you'll get 25 autographed copies of Double Exposure, be thanked first on the dedication page, and you will receive 10 invitations to the Double Exposure launch party. Also includes Ebook and unique Double Exposure oversized coffee mug.

From Russia, Cross-Country Through Time

Russian refugees, Victoria and Felix, celebrate their golden wedding anniversary by driving cross-country for fifty days. They built a happy and successful life in the United States, however, their past life in the Soviet Union was always casting a shadow, like double exposure in an old film. Inside each amazing travel day is hidden a story of Victoria’s family: her grandparents’ life in Ukraine after the Revolution, her  great–grandfather’s execution during the Civil War, and her grandfather’s death in Babi Yar.  Her parents, both physicians, fought in WWII. Victoria grew up in Kiev facing all the hardships of life in the Soviet Union. Victoria’s first husband died when she was pregnant with their first son. Mortally wounded by the tragedy, Victoria tried to rebuild her life. She married Felix and they had another son. Both, Felix and Victoria hated life in the Soviet Union. Facing problems in their marriage, they nevertheless decided to keep their family together and emigrate. They risked everything after they applied for exit visas and Felix was arrested at the border.  When they arrived in America, sponsored by a Jewish community, they faced a new language and new traditions. They lived through many frustrating misadventures, hilarious mistakes and heartbreaking times but they were finally free! Ride cross-country and through history to get a rare and personal glimpse into the life of a woman, a family and the country.

Leverage close to a thousands friends, followers, and professional contacts via social and email campaigns to drive subscriptions to Publishizer updates, blog, and to expand the reach of the pre-order marketing to their social circles via personal grass roots recommendations.

Email campaign targeting prominent Jewish communities to encourage a discussion about what some immigrants escape when they come to the US, and how Jewish communities have played pivotal roles in helping people establish new lives.

PR campaign offering advanced copies of the book to select bloggers and authors for review, as well as audio and video live interviews with the author.

"Panic in a Suitcase: Emigration and family who stayed behind" Yelena Akhtiorskaya 2014

“The Cosmopolitans”  by Nadia Kalman 2010

My heart jumped so fast it made me lean on the corner of the house next to the open garage door.  The big day was here and it excited and in the same time scared me.
The lazy late August sun painted white streaks on my shiny car and I could sense the crisp coolness of the fall in the morning air.
As always, sleepy morning of an early autumn reminded me Septembers of my college years when a bittersweet smoke of the dying fires drifted slowly above foggy Ukrainians fields.
Colleges and Universities started their academic years by sending students to the local collective farms to help with the crops. Since then, a dim September sunrise, a cool prelude to the fall, always took me back to 1960s and a city girl lost in the sad endless fields.
My heart jumped once more and returned to a slow trot. We were leaving; the car was packed and Felix just came out of the garage.  We were at the start of the adventure of our lives.
“I did it, I did it!” I was singing soundlessly.
We planned to drive from Massachusetts to Northern California   visiting National Parks and Monuments on the way, then  turn South onto Pacific Highway to Santa Monica  and  from there drive back to Massachusetts by the south route visiting more Parks and places. We planned this trip around family wedding in Kansas, a visit with our son and Grandchildren in California and, the most of all, our Golden Wedding Anniversary. We planned to travel one day for each year of our life together; it would be a long drive!
I looked at our car packed for the trip and thought about the anniversary, how did we get to this point?  How did we manage to stay married for almost fifty years?  How did our marriage survive a life packed with curve balls and high seas?  How rocky was our boat through the emigration, a language barrier, culture shock and penniless beginning?
Yet, on this beautiful August morning, I carefully navigated my X5 out of our circular driveway with an island full of blooming flowers to Mass Pike brimming with early morning traffic.
Our route mapped out, we left Massachusetts behind at no time.   We headed to Kansas for a family wedding and planned to stop in Ohio for our first night on the road.
Steamy downpours hit us somewhere in the hills of New Jersey but we were on our way across America; what could a little rain do?  I looked at sleeping in the passenger seat Felix.  He was still weak and pale after double pneumonia. He opened his eyes as if feeling my concern.
“How are you doing, Victoria? I feel better; I think I can drive for a while.”
From the passenger seat, I watched the road and stared at the wet windshield.  It became chilly in the car.

Felix was driving west to our first stop in Ohio.   The rain stopped and sun was low, so low that the visors did not help.  He was holding his hand up, blocking the sun with his palm.  The last rays of sunset warmed the car and I shed my light sweater. Through his glowing hand Felix took a sideway look at me.
“Are you dreaming of somewhere hot, Victoria?” he asked.
I did not answer.  I was not dreaming. I was somewhere long time ago on the cold winter,  in the heat of the night, in a very small room in Kiev. With Dima…